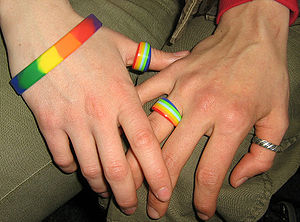 This won’t exactly come as a surprise, but just like President Obama who used to be against gay marriage before he was for it, leftist Jim Wallis, founder and CEO of Sojourners, now says he, too, has evolved his position.  In an interview with The Huffington Post, Wallis says he now believes that if marriage as a sacrament and institution is to be strengthened, then same-sex couples should be a part of that solution.

Here is where The Christian Post picks up the story:

When The Huffington Post asked Wallis to clarify if that meant he specifically supports same-sex marriage, Wallis answered, “yes.”

A spokesperson for Sojourners confirmed with The Christian Post on Monday that this was the first time that Wallis has publicly stated that position. Wallis was stating what he believed from a “civil legal perspective” what the law should be, but was not stating a theological position about whether churches should endorse same-sex marriage, the spokesperson said. The spokesperson could not say whether or not Wallis believes homosexuality is a sin.

Wallis’ new position also comes with strong support for the religious liberty of churches that hold the traditional view of marriage in states that have redefined it, and a deep concern for the decline of marriage more generally.

Wallis added that those who oppose government recognition of same-sex marriages should not be called “bigots” for holding that position.

“On the issue of gay marriage, you can be supportive of same-sex couples being able to have the same benefits that straight couples have, but you can also be in favor of religious freedom for faith communities to figure this out in their own time, in their own scriptures, their own way. I don’t think they should be called ‘bigots’ if they are struggling with what the Bible says about this, or might we lose marriage because of this. … But calling each other names, we’ve got to stop doing that.”

“I don’t think the sacrament of marriage should be changed. Some people say that Jesus didn’t talk about homosexuality, and that’s technically true. But marriage is all through the Bible, and it’s not gender-neutral,” Wallis said, for instance, in a 2008 interview with Christianity Today.

“We believe the best path forward is a legal system that respects the rights and responsibilities of all couples, gay or straight, and also respects the religious liberty of faith communities to define marriage consistent with their theology and scriptural understanding,” Sojourners said.

The culture shift and homosexual Christians

When truth is framed as "hate"

Cause and affect of gay marriage