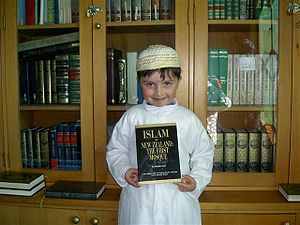 Have you ever been in a church where the issue and threat of Islam was discussed?  Well I haven’t, and I am left wondering why that is.

Islam is a rapidly growing religion and is attracting many youth, even here in the United States.  It teaches worship of a false god and is a real threat to Christianity on several fronts:

First, it takes parts of the Old Testament Bible and twists them.  In this way it attempts to undermine the roots of Christianity.  Second, as we have discussed, there is a growing movement with some Christian leaders to find common ground with Muslim teachings in the Koran.  We are seeing more Christian leaders open to the possibility that Allah and YHWH are one in the same God.  This is a blatant disobedience of God’s first commandment—yet our church leaders seem reluctant to discuss Islam and its false teachings.  Why is that?

It could be fear, as radical Muslims preach terror and death to Christians and Jews.  It could be ignorance, as pastors claim they do not know enough about Islam to address the issue.  But I don’t think either of these are the primary reasons.  I think the primary reason is we have become so concerned with offending anyone with our Christian faith that we avoid any controversial topics.  Well here’s some breaking news—the gospel is offensive.  It preaches that the only way to God and eternal life is belief and trust in Jesus Christ as the Son of God.  The quicker we come to grip with that fact, the quicker we will be able to reach more lost people with the message of salvation.

And quite frankly by ignoring the facts and threats of Islam, we are shirking our responsibility to reach Muslims with the true gospel.  We talk about our command to love all men as Christians—and of course we should.  But perhaps we should take a look at our definition of love.  If we truly love someone who is lost, we will risk being branded as close minded to share the only real truth—God and Jesus Christ.  Instead we seem to have redefined love as not risking offending anyone—just accepting them where they are.  What some might call love, I call cowardice.

The Muslim faith is growing rapidly, even in our own communities.  While this does present a threat, it provides an even greater opportunity to reach people with the true gospel—if we only have the courage to do so.  Tomorrow we will tackle the topic of leadership.  One of the core responsibilities of leadership is courage.  As Christian leaders—pastors, ministry leaders and parents–do we have the courage to speak out with the truth even if it is unpopular or seen as close minded?  Time will tell.   But sadly it seems courage is lacking more and more within the Christian community.

All Eyes on Israel; Nabeel Qureshi, and Pastor’s Wives

World Religions and the Challenge of Religious Freedom