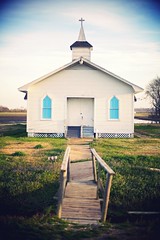 Well, you are not. But it can be frustrating sometimes, right?  Here is a letter to the editor of Lighthouse Trails Research, from someone who could be from any town in the U.S. Perhaps even yours…

I have been reading Roger Oakland’s book “Faith Undone” and have come to realize that there is absolutely no preaching, at least in our community, against the dangers of the emerging church or contemplative spirituality. The people are totally in darkness, and most of them have no interest in reading about it.

It is new to me, and I am trying to get educated on the subject.I don’t remember if I told you, but here in _________ there is a pastor who is supposed to be a Baptist, but has written five books promoting universalism and the cosmic christ, among other things. He has an article in the Sunday paper every other week which his church sponsors. He thinks Rob Bell is wonderful and has written five columns about him.

I have written several columns in the newspaper to alert the Christians of the dangers, but it seems to fall on deaf ears, except for a few people.

I know several Christians in his congregation. They are educated,intelligent people. How can they sit there week after week and listen to this dangerous garbage? Even after I have pointed  out the dangers they disregard my comments.

One judge, a member of the church, has even hinted to me in a veiled threat that I might stir up trouble (law suit?). He didn’t actually say that, but the hint was clear and also published in the paper. The pastor, he said, is a likeable man, wonderful pastor and highly intelligent preacher. He is loved by his church,the judge said

I am not going to argue with _________ anymore, but it is frustrating. This is like an unseen cancer attacking the body of Christ. (Maybe I should say an occult malignancy.)

I just want to encourage you in your work.You may think you are not making any headway, but you really are educating at least some of us. Just wanted to become a friend of yours.

"Davos" is a word you should know

The Cult of Modern Liberalism