“Islam is a government of its own. It has its own laws for every facet of society and they are in complete disagreement with the United States Constitution.”  Mano Bakh 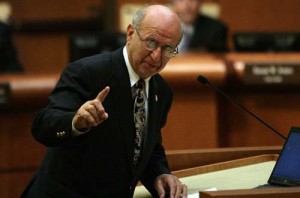 Today in the first half of the program, we’re going to explain how Sharia is spreading in communities across America, and threatening our constitution. We’ll hear from one man, Mano Bakh, who came out of this worldview. Mano is a former Muslim and also a former Iranian Admiral.

He is also the author of the books “Escaping Islam” and “From Terror To Freedom”. He speaks out and warns Americans about Sharia law. Here is more about Mano from his organization he founded, Concerned American Citizens:

It is time to call attention to the moderate Muslim. Do they eliminate the governmental side of Islam that includes “Shariah”? It is also time to take a role call on this subject and hold all moderate Muslims accountable. It should not be difficult to become transparent, if these moderates wish to practice only the spiritual side of Islam and desire to assimilate into the American culture, reform is mandatory, let it begin!!!
As a former Muslim, now an apostate and proud American, I have committed myself to demand answers from the Imam’s throughout the country, as well as all publicly admitted moderate Muslims, to come forward and declare their denouncement of barbaric Shariah law. Because of my personal background, I have a good understanding of Islam. I understand the fear associated with any deviation from the Quran and Muhammad’s words. I also understand, the spirituality involved in praying, shoulder to shoulder. Prayer should be respected; however, seventh century laws and the Islamic agenda to conquer by submission can not be tolerated.
The demands for Islamic trappings such as foot baths and separate bathrooms for Muslims must be eliminated. Demands to pray at inconvenient times can be adjusted to more appropriate times. All of these trappings are demanded and expected to be protected under the religious freedom act. These demands are constantly being used to intimidate non Muslims. They have nothing to do with the spiritual side of Islam.

What is Sharia Law, and who in the United States is supporting it? While some accuse Christians of being overly concerned or “demonizing a religion of peace,” many others–both in the faith and outside the Church are sounding the warning about Sharia in the U.S.
Sharia holds Muslim believers to a different set of standards which defines honor and what is right in Seventh Century Islamic Laws. Here are a few practices we are seeing in the United States, and how Sharia Law empowers male Muslims:
1. Consider women as not created complete because they are not created as men they are considered to be only half the worth of a man.
2. Gives males the right to govern their daughters according to the standards set down by Allah.
3. Gives males custody of his children in divorce cases.
4. Gives the male the right to beat his wife as he sees fit.
5. Empowers men to divorce their wives when they so desire.