Christianity in America: Philadelphia or Laodecia? 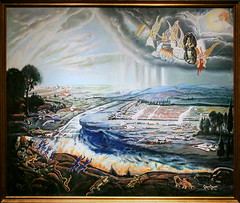 Ten days ago American voters cast their votes for the future direction of this nation.  We tend to look at presidential elections as our choice for the next four years in this nation, but often because of the power accumulated in Washington D.C., our votes have far more reaching consequences.  So let’s try to summarize what America chose 10 days ago:
By re-electing President Obama, Americans chose the security of big government over the freedom of self-determination economically.  I confess I was surprised about the outcome—I thought the American spirit of freedom and self-determination would rise up, but in retrospect I should not be surprised.  When people feel they are in crisis, they often revert to safety over risk.  And a majority of American people made their choice for an overly protective and dominating federal government over the risk of having to provide for themselves.
Obamacare is now safely the law of the land.  None of us completely know what we are getting but the early indications are unsettling to say the least.  Taxpayers will now be paying for birth control and abortion inducing drugs even if it conflicts with our religious beliefs.  This is another price we pay when we ask government to take care of us—we lose our freedoms and often forfeit our values.
But as my wife often says—“it is what it is.”  So as Christians we move forward.  But where do we turn our attention?  Do we continue to fight the culture wars on a broad basis, hoping our nation will reverse course and return to God?  Or do we accept the spiritual decline of America as inevitable and concentrate our efforts solely on proclaiming the true gospel of salvation to all we know, abandoning any hope of a huge national revival?  Do we concede our nation has become a country that has thumbed their noses at God?  Or do we continue to fight and hope for a national revival that will return this nation to its Judeo-Christian foundational roots?
In Jesus’ message to the Church in Laodicea, He chastises the church telling them “you think you are rich, but actually you are wretched, pitiful, poor, blind and naked.”  This message was not given to the governing Roman authorities at that time—it was delivered to the Church!  So what message should we glean from Jesus in this letter?  Well as I study the Church of Laodicea, the people seemed to want to have the best of both worlds—an appearance of true Christian faith blended with the values and financial security that the Roman government brought.  Does that sound like the Church in America these days?
So ten days ago Americans voted for big, intrusive government and four states voted to legalize homosexual marriage.  We did not here a peep about the tragedy of abortion from either candidate.  What are we to take from this?  I’m not certain but I think this election better be a huge wakeup call to the Christian Church in America that times are changing.  A majority of Americans now support homosexual marriage and the abortion issue has become a non-factor in both political parties and in the minds of most Americans.  Religious freedom is now under attack through national healthcare.
So perhaps we will soon find out which Church in Revelation most accurately reflects the values of the Church in America:  Will we be the Church of Philadelphia who Jesus commended by saying “I know you have little strength, yet you have kept my word and have not denied my name”?  Or will we become the Church of Laodicea, seeking compromise between our stated Christian beliefs and values with a growing, corrupt government?  Time will tell, but either way I think we are in for a very bumpy and interesting ride.  Every one of us—and every local church—will one day have to decide if we remain true to Jesus and His Word—or if we bow to a nation who seems to have chosen secular humanism over the teachings of God.
Are we prepared?