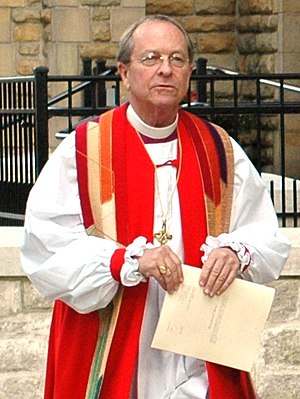 Where could young minds be educated without the progressive and secular humanism forced on them in the public school system? Only two places: home schools and private Christian schools.  The Christian Post files this story:
Gene Robinson, the first openly homosexual bishop in The Episcopal Church, believes that voucher programs that benefit religious schools are a “tragedy.”
The controversial bishop of New Hampshire told The Christian Post on Monday his views on vouchers at an event sponsored by the Center for American Progress on the issue of poverty reduction.
“I am a believer in public education and I believe every dollar diverted from public education either by religious schools or by charter schools is a tragedy,” said Robinson.
“[A voucher] takes away from this great mission that is so embedded in the life of this country… I just favor full and un-diverted support for those public schools.”
Robinson also explained to CP that he made such conclusions from his own experience as a “product of public schools” and president of two private schools established by The Episcopal Church.
“Frankly as the bishop of New Hampshire, I am the president of two private schools and my heart isn’t in it,” said Robinson.
“They are not particularly religious schools. They had their beginnings in The Episcopal Church which is why I sit on the board.”
Robinson’s remarks come on a day when he was part of a panel on efforts to reduce poverty sponsored by the Center for American Progress. Titled “The Right Choices to Cut Poverty and Restore Shared Prosperity,” the event featured a three-person panel on the issue of poverty reduction as well as other guest speakers.
The other two panelists were Lloyd Lamm, regional banking executive of the Capital Region at First National Bank of Pennsylvania; and Deborah Weinstein, executive director for the Coalition on Human Needs. Wade Henderson, president and Chief Executive Officer of The Leadership Conference on Civil and Human Rights, moderated the panel.
In an interview with CP, Henderson commented that he did not feel vouchers to religious schools were the issue per se, but did express concern about regulation of said practice.
“I think that voucher programs too often siphon money off of the public system without evidence that the new program being funded is substantially better,” said Henderson.
“I think the question now is how do you provide quality public education for students, whether it’s in the public arena or in the charter arena.”
The CAP event spotlighted the progressive organization’s annual report, known as the “Half in Ten” report, which focuses on how the United States is doing in reducing poverty and creating economic opportunity.
“On November 19 the Half in Ten campaign will release its second annual report that answers this question, tracking the nation’s and each state’s progress toward cutting poverty in half over the next decade through indicators relating to good jobs, strong families, and economic security and opportunity,” reads a press release.
“The report also outlines a pathway forward, outlining a set of policy priorities and explaining that poverty reduction can be achieved hand-in-hand with long-term deficit reduction if we make the right policy choices.”
While a major theme at the CAP event was the need for government programs such as SNAP and unemployment benefits, both Henderson and Robinson told CP that they believe the private sector is a necessary component to poverty reduction.
“I think the private sector can have a very significant role in reducing poverty,” said Henderson, who felt that businesses “could motivate the federal and state governments to invest in issues like education and training as ways of preparing a work force for the jobs that the private sector has today and will have in the future.”
“I think that the private sector is obviously where most of the jobs will come from,” said Robinson, who added that “we are all in this together and that every dollar put in the pocket of a poor person is a dollar spent.”
In addition to the panel, there were several other speakers at the event. This included Mayor Antonio Villaraigosa, Mayor of Los Angeles, who gave the keynote speech, and Angela Hutton, a mother of two who detailed her harrowing experiences going from wrenching poverty to middle class status and a good college education with the aid of government welfare programs.