Obama Supporters Claim They Will Kill Romney If He Wins Election 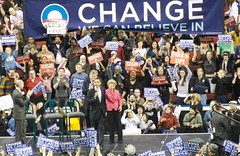 This is from theintelhub.com as well as many other sources we’re seeing shared today:

Supporters of President Obama have apparently taken to Twitter to threaten Presidential hopeful Mitt Romney with assassination if he happens to win the election.
This comes just days after numerous Obama supporters actually claimed they planned to riot and start a form of martial law if Obama loses.

“Despite the issue receiving national media attention, Obama supporters continue to threaten to riot if Mitt Romney wins the presidential election, raising the prospect of civil unrest if Obama fails to secure a second term.

The new threats continue to dominate Twitter and the vast majority make no reference to press coverage of the issue over the last week, illustrating the fact that they are a legitimate expression of how many Obama voters plan to respond if Romney comes out on top, and not merely a reaction to media hype,” reported Paul Joseph Watson.

A  series of reports published on Twitchy first brought the literally dozens of threats made by real Twitter users to light, highlighting that the users appear to be actual Obama supporters.

The sheer amount of threats would literally take hours and dozens of pages to publish.

Click to read a sampling of the threats via Infowars and Twitchy: