Dandelions and kitty-cats are sweet, but my tear ducts and lungs need a few degrees of separation. So as someone who occasionally uses an inhaler, this article from NaturalNews about the future of tracking devices is disturbing (and much more invasive than the dander and pollen).

Big Brother is finding new and inventive ways to keep track of you these days, thanks to an explosion in technology, and that now includes the healthcare industry, once considered a bastion of privacy. 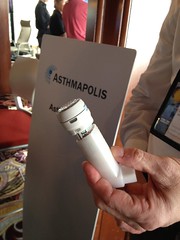 According to Wired magazine, a new “smart” asthma inhaler, which is designed to work in conjunction with a computer suite, allows health professions to track when a patient is having an asthma attack – including tracking the location of the patient when the attack is occurring.
The suite, called Asthmapolis and which is being sold to consumers as a safety feature (sound familiar?), is supposed to help both patients and healthcare providers alike “better monitor the behavior of asthma,” Wired reported.
‘Tracking’ asthmatics – For their own good, of course
The key to the system is a Bluetooth-enabled sensor that patients attach to their inhaler. Every time the inhaler is used, the sensor records both the time and the patient’s location.
“Using a smartphone or base station, that information is in turn transferred to Asthmapolis’ servers where the data can be used by individuals to track their response to treatments or by public health officials to spot and map patterns and outbreaks,” reports Wired.
David Van Sickle, founder and CEO of Asthmapolis, said he was inspired to the concept during his work at the Centers for Disease Control and Prevention in Atlanta, where the federal health agency investigated outbreaks of respiratory illness, and then once more when he worked in clinical practice.
“There’s a ton of variability of asthma within micro-environments,” says Van Sickle. Experts say getting data about where and how often patients use their puffers is not only vital to obtain but difficult to collect.
“Historically in asthma we haven’t done much except provide patients with a rationale for keeping pen and paper and encouraging them to bring them to their next visit,” Van Sickle said.
The problem is, he and others say, that few patients like to do this because they view it as one more burden that comes with their disease. That leaves them either forgetting to write down their information or trying to guess.
“We know those diaries are often inaccurate. They’re generally fabricated,” Van Sickle said.
The former CDC clinician says the same problem occurs at a public health level; there is a tendency to record where people live when there is an outbreak. “The assumption is that all that happened at their house, which is a bad assumption to make,” he said.
Asthmapolis is designed to close the data gap by making collection of information part of taking the medicine. The puffer sensor is installed on top of the device; when the patient presses down to inhale the medicine, the sensor detects that and a GPS system and clock record the event, documenting time and place.
“Asthma patients are a tough demographic,” says Van Sickle. “We’ve got kids, older folks, people where it’s work related, people who need it when they exercise, and people who don’t use it often.”
Since the data collection is automated, that gives health providers a more accurate picture of when their patients are having difficulty with their disease – and when they are not.
“One benefit that sensor-driven products have is that you know when somebody has used the inhaler and you know when they haven’t,” Van Sickle said. “It makes the absence of data meaningful.”
But there is that issue of privacy.
No mandate to track – yet
Worse, this kind of insta-data approach is a developing trend in healthcare, industry insiders say. Asthmapolis joins other firms like Massive Health that use what they call “indirect surveillance” and data collection to get patient information.
“Data from the medications and how often people use them is the most important marker,” says Van Sickle.
The goal, he adds, is to allow health providers access to what they believe will become a more accurate picture of what’s going on with their patients – regardless of the privacy implications, apparently.
“Our company succeeds to the extent that we make it easier for patients to manage asthma,” Van Sickle said, adding that it was important to make the sensor unobtrusive (perhaps so the patient forgets he’s being tracked?).
“We wanted it to be like a machine that helps them accomplish work rather than adding to the day-to-day burden,” he said.
There isn’t a federal healthcare mandate – yet – to use such “unobtrusive” medical tracking devices, so patients still have a choice over whether or not they want to be tracked.
Sources:
http://www.theblaze.com
http://www.wired.com/design/2012/11/asthmapolis/
http://asthmapolis.com/