In 1 Corinthians 14:33 we are told that “God is not the author of confusion, but of peace, as in all the churches of the saints.”  Now while in this particular verse Paul is speaking of people prophesying in the church, I think the application can also be applied to teaching and stances we are to present as Christians.  Christian leaders and churches must be clear about what we believe and what we consider false and dangerous teachings we are to oppose. 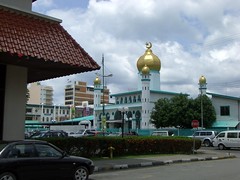 When a church like All Saints Episcopal Church in California brings in Muslim leaders to teach from the Koran and suggest there is religious common ground between Islam and Christianity, how is this bringing clarity instead of confusion?  We are clearly taught in 1 John that Islam, or any religion that teaches Jesus Christ is not God in the flesh, is a religion of anti-christ.  So what can possibly be gained by people who teach that Muslims and Christians worship the same God?  Let’s explore that.

Muslims have much to gain.  When they are invited to teach in Christian churches, not only are they seen as a mainstream religion that should be respected and embraced within Christianity, their appearance has great significant value in their quest to conquer the world for Allah.  Islam, which calls for forced conversion and potential death to unbelievers, is now seen as a moderate religion that has much in common with biblical Christianity—something that would be laughable if it wasn’t so tragic.  By inviting Muslims to teach in our churches, we are giving gravitas to their satanic teachings and telling Christians they are spiritually equal with true Christian believers in the eyes of God.

But what do Christian leaders who invite Muslims into our churches have to gain?  The respect of the world—which we are told by Jesus to shun!  We are called not to compromise with the fallen world and false religions, but rather to stand out as unique in this fallen world.  We are called to be a beacon of light and truth in a world that has chosen evil, aligning itself with Satan instead of God.

But too many of our Christian leaders cannot resist the temptation to be seen as “peacemakers”—even when they are compromising with a religion of anti-christ.  They seem to value the love and respect of men over remaining true to God and the purity of His Word.  Now I know that sounds very harsh, so let me explain my stance one more time:  Not all Muslims are evil and Jesus Christ became the sacrifice for sin through His death to offer eternal life to all men—Christian, Jew, Muslim alike.  Our faith in Him as the eternal Son of God come in the flesh brings us salvation, forgiveness of sin, and eternal life with Him.  However acceptance of His sacrifice and gift comes with the responsibility of truly trusting in Him as the one true God.  We are clearly warned to forsake all other gods if we are truly saved by His sacrifice.  And we are taught to preach the gospel to all men—Jew and Gentile alike, so they might come to believe in Him who the Father sent.

But some just cannot resist the temptation to be respected by the world and seen as “peacemakers”.  Now, while we are called to live in peace with all men whenever possible, we are never called to compromise the gospel for the sake of being loved by men.  In fact we are taught the opposite—that Jesus would divide “a man against his father and a daughter against her mother.”  But this is what happens when Christians do not read or understand the Bible.  False and dangerous teaching and compromise that tickles our human ears becomes acceptable and promoted even in the church itself.

As we have stated many times on this show, we should not approach Islam out of fear or ignorance.  We are to love Muslims—love them enough to tell them the truth about Jesus.  But even more importantly, we should love God to the point where we would never ignore His Word or teachings to promote ourselves before other men.  Instead of being ashamed of the gospel, we must boldly proclaim it in love and conviction to a world that is decaying rapidly.

In Acts Chapter 5, Peter and the apostles are warned to stop preaching the gospel but they respond with “We must obey God, not men.”  Now would be a perfect time for self-appointed Christian leaders to heed this passage and start obeying God instead of seeking the approval of men.  Is this asking too much—to bring clarity instead of confusion into the church?  Or are we truly ashamed of the gospel because we will be seen as intolerant?  Time for every one of us as Christians to take a good hard look in the mirror and see what we truly stand for these days.  And if we find ourselves more concerned with what others think of us instead of obeying God, we best change that in a hurry.

America and The Church in Decline?

Preparing to be Shaken

God and the (Fill-in-the-blank) Christian

This year’s Christmas must have… a ouija board