Is "Jesus Calling" in your library? 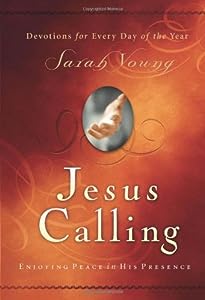 It’s time to revisit the topic of Jesus Calling, a book written by Sarah Young. I continue to get protest comments from a book review I shared last summer titled, Is “Jesus Calling” a wrong number? (Book Review).  Yes, a lot of Christians love this book, and you’ll find it in a growing number of church libraries. Even churches that were always considered to be “solid.” Other public figures are urging Christians to buy as many copies for their Sunday School and women’s ministries as the can, as one writer says:

Jesus is calling you! Can you hear Him? Will you respond? New York Times best seller-Jesus Calling, will introduce you to a different Jesus than the one you have heard about your whole life. Sarah Young shows us her Jesus, and He is your Jesus too. Listen…you will hear His voice…Jesus is Calling.

(emphasis mine) Source: 1nest.wordpress.com
So are we now supposed to find new ways to hear Jesus’ voice, speaking directly to us?  Look, I’ve no doubt that God does speak through His word and the Holy Spirit, who convicts us. But where does one draw the line between His Word to us, and us attempting to hear Him? And if we are hearing voices, how do we know it’s His?
Over at Apprising Ministries, Pastor Ken Silva dives into this topic and shares why many Christians like him are warning others to steer clear of this not-so-innocent book:

If you’re not familiar with Sarah Young’s Jesus Calling (JC) I’ll share with you what I brought out when I covered it back in Beth Moore Recommends “Jesus Calling” Book Claiming Direct Divine Revelation.
JC, which is said to be “Devotions for Every Day of the Year,” is published by Thomas Nelson publishing.2 There really isn’t a lot of information online about Sarah Young:

In his review of JC, which I’ll be returning to, well known Reformed Christian blogger Tim Challies informs us:

Sarah Young is the wife of a third-generation missionary to Japan who has earned post-graduate degrees from Covenant Theological Seminary in St. Louis, a Presbyterian seminary. (source)

Young tells us herself in the Introduction to JC:

I began seeking God’s Presence in earnest. My days started alone with God, equipped with Bible, devotional book, prayer journal, pen, and coffee. As I waited in His Presence, God began to reveal Himself to me.3

Now, we’ll hear that type of language in charismatic and mystic circles, which are now overlapping with the spread of so-called “spiritual disciplines” of Contemplative Spirituality/Mysticism (CSM) under the guise of supposed Spiritual Formation.
However, what Young is describing is a form of divination, the occult; it is the attempt to gain knowledge of God outside of the Bible, a means of grace He has prescribed as the way to come to Him. Some time ago CBN ran Q & A with Sarah Young.
There she’s asked how she learned “to ‘dialogue’ with God?” Her answer should disturb you:

My journey began with a devotional book (God Calling) written in the 1930′s by two women who practiced waiting in God’s Presence, writing the messages they received as they “listened.” About a year after I started reading this book, I began to wonder if I too could receive  messages during my times of communing with God. (source)

There’s nowhere in the Bible that we’re taught about waiting in God’s Presence in order to write personal messages we allegedly receive from God. We must understand that the lives of the writers of inspired Scripture are simply not normative for the Christian.
In fact, this all begins to sound like what’s known as occultic automatic wriitng; and yet, Young still tells us “this little paperback became a treasure to me.”4 I happen to have a copy of that book God Calling (GC), which was cited by Young above.
You can actually find it online at the website of these women, who bill themselves simply as “two listeners.”5 They tell us they were personally receiving direct revelations from God Himself to instruct them, unlike us mere mortals who go to Scripture:

with my friend a very wonderful thing happened.  From the first, beautiful messages were given to her from the Lord Himself, and every day from then these messages have never failed us.
We felt all unworthy and overwhelmed by the wonder of it, and could hardly realize that we were being taught, trained and encouraged day by day by Him personally, when millions of souls who are  far worthier, had to be content with guidance from the Bible, sermons, their Churches, books and other sources.6

As you can plainly see, they do claim divine inspiration for their writings; and like her listening mentors, so does Sarah Young. CBN asks her how “awkward was it initially to begin a ‘dialogue” with God?” Young replies:

It felt a little awkward the first time I tried it, but I did receive a short message… at that point my journaling changed from monologue to dialogue. Day by day, messages began to flow more freely. This new way of communicating with God became the high point of my day.
(source, emphasis mine)

No way around it; Young is claiming she “did receive a…new way of communicating with God.” Those are her words, not mine. Young fully realizes that she’s describing divine inspiration for her messages so she then adds a caveat in order to try and deflect away that charge.
Young tells us, “I knew that my writings were not inspired (as only Scripture is).” But she can’t have it both ways; when God speaks, it is Scripture. Or are we supposed to believe He also speaks non-authoritatively, which is a view common in charismatic circles.7
Here the following from my friend Dr. Gary Gilley will prove helpful when he tells us people like Sarah Young:

would claim that while they believe that God speaks to His people apart from the Bible today, that these revelations are not on par with Scripture. That is, God speaks today but not with the same authority as He did in His Word. So do not accuse us of adding to Scripture, they would say.
Interestingly enough, this brings up another issue. We find in the Bible that God did speak, either orally (including through His prophets) or through the written Word, but in both ways — always, His Word is authoritative. It was nothing less than a word from God — one that must be obeyed and heeded! (source, bold his)

Like I said before, that supposedly conservative Southern Baptist Bible teacher Beth Moore would recommend her readers buy this book by Sarah Young ought to be cause for serious concern about her discernment. All the more curious to see it added to the FPC website.
In his review of JC, which I referenced earlier, Tim Challies now gets to the heart of the matter concerning this kind of neo-gnosticism of these supposedly superior listeners:

As I have spoken to others about the book, I’ve heard some people say that this book is written as if Jesus is speaking to the reader. But it’s important to know that Young makes a far more audacious claim—this is Jesus speaking, through her. The messages he has given her, she now passes on to us.
This is a very good time to pause and consider this claim. Sarah is claiming some kind of new revelation from God. She is saying that God speaks to her and that she then passes these messages to others. Immediately we need to ask what she believes about the Bible. Is she claiming that these messages are equal to Scripture? That they trump Scripture?…
Young begins to share those words of God as daily devotionals, saying “I have continued to receive personal messages from God as I meditate on Him. The more difficult my life circumstances, the more I need these encouraging directives from my Creator.”
James Montgomery Boice once said that the real battle in our times would not be the inerrancy or infallibility of Scripture, but its sufficiency—are we going to rely on the Bible or will we continually long for other revelation? In Jesus Calling we see this so clearly. Young teaches that though the Bible is inerrant and infallible, it is insufficient. It was not enough for her and, implicitly, she teaches that it cannot be enough for us…
Jesus Calling is, in its own way, a very dangerous book. Though the theology is largely sound enough, my great concern is that it teaches that hearing words directly from Jesus and then sharing these words with others is the normal Christian experience. In fact, it elevates this experience over all others. And this is a dangerous precedent to set. I see no reason that I would ever recommend this book. (source)

So, why has First Presbyterian Church of Dr. Sinclair Ferguson added these dangerous resources to its library?