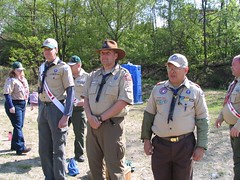 IRVING, TX (AP) (February 6, 2013) – The Boy Scouts of America’s national executive board has delayed a decision on whether to lift its longstanding ban on “gay” scouts and leaders.
BSA said Wednesday the organization will take action on the resolution at its national meeting in May.
The organization said last week it was considering a shift of its policy, which has led officials to remove homosexual leaders and scouts. That announcement pushed years of debate over the policy to an even higher level.
President Barack Obama — Scouting’s honorary president — spoke in favor of letting homosexual scouts in. Others opposed a shift. Protesters on both sides rallied at BSA headquarters in Irving, outside Dallas.
Scout leaders across the country will now have to decide how to handle a very delicate issue.