“Lord, what are we going to do?” asks a disciple.
“Change the world,” Jesus answers, in a slightly British accent.
Here is the movie trailer from the History Channel’s new The Bible series set to debut March 3rd – Easter Sunday:

Will The Bible remain true to Scripture, or will its producers, Roma Downey (“Touched by an Angel“), and her husband Mark Burnett (creator of reality TV shows “Celebrity Apprentice,” “Shark Tank,” “Survivor” and “The Voice”), change things? We won’t know until we see it, but already The Bible is getting huge accolades and even a smartphone app. Downey plays Jesus’ mother Mary in the series. 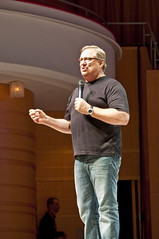 And when America’s Pastor, Rick Warren ties his name and his Saddleback church to the project, well, many of you are probably wondering about the wisdom in joining in any church-sponsored small group studies around this movie.
Warren plans to give an exclusive preview and behind-the-scenes look at the production in a  90-minute simulcast that will feature an overview of the series with Burnett and Downey, according to Pastors.com, Warren’s website for Christian leaders and pastors.
Warren will incorporate the History Channel TV series during the next five weekend sermons. His Sunday evening services will feature a viewing of the series on big screens. He is encouraging other churches to do the same. Will your church tie into the Saddleback series?