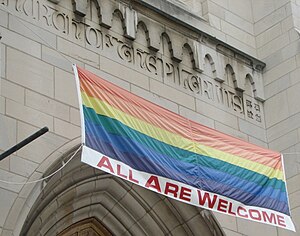 Leaders in Rockford, Ill., say they want to be more attentive to promoting equality through language and rites.  Here is the story from Rockford Register Star:

ROCKFORD — As more faith groups publicly embrace their gay and lesbian members, pastors are devising new ways to incorporate these parishioners into the routine of congregational life.
Emmanuel Lutheran Church affirmed its support for these faithful last week by becoming Rockford’s first Reconciling in Christ congregation, the designation used by the Evangelical Lutheran Church in America for congregations that openly welcome gay and lesbian believers.
In doing so, Emmanuel Lutheran joined a handful of other faith communities.
Illinois doesn’t recognize same-sex marriages, but advocates have been crusaders by supporting them in the church with inclusive language and same-sex matrimony celebrations.
“It means opening and affirming to every individual or anything of distinction that any human being can make up. It means for everyone,” said the Rev. Ivan Schoen of Spring Creek United Church of Christ, one more congregation that is open in its acceptance of gays and lesbians.
His congregation believes that God hasn’t finished speaking, opening the way for the church to provide guidance on modern-day issues that weren’t addressed in ancient times. According to that line of thinking, the church must be open to new approaches to social issues, including sexuality.
Paving the way isn’t easy, so Emmanuel Lutheran has tried to create a safe place for Christians.
Member Catherine Rennert said the congregation has been welcoming gay and lesbian parishioners for more than 10 years and has hired staff members of various sexual orientations.
Worship leaders use inclusive language, such as “Divine Beloved” or “Creator” rather than the more traditional “Father” in reference to God.
“We don’t want to start separate groups. We want everybody to be appreciated for what they can bring to the church,” Rennert said.
As more congregations welcome gay and lesbian people, parishioners may be able to choose a church based on its theology rather than its stance on sexuality.
David Black, vice president of the Unitarian Universalist Church of Rockford, said people flocked to the congregation when it became welcoming and affirming because it was one of the few places where people of diverse sexual orientations could worship without being judged.
There even were years that pastors performed more same-sex marriages than opposite-sex ones.
“We felt there were a number of churches that were not openly welcoming,” Black said. “People in our church felt differently, so we could made that known so people could find a home.” Amelia Garcia, a 23-year-old poet and barista at Katie’s Cup Cafe, is “incredibly grateful” that the church has taken its stance.
Garcia doesn’t attend Emmanuel Lutheran, but she believes the public announcement — parishioners formally voted Jan. 27 in favor of Emmanuel becoming Rockford’s first designated Reconciling in Christ congregation — has ramifications beyond the walls of the church.
“As a member of the LGBTQ community, it makes me feel stronger and safer to see a church do this. It’s very important to see a mainstream-type church, especially a Lutheran church, take this stance because a lot of mainstream religions sometimes make people who are LGTBQ feel like they don’t belong or that they’re wrong or that they’re not worthy of God’s love.
“It’s a great step forward.”