Cause and affect of gay marriage 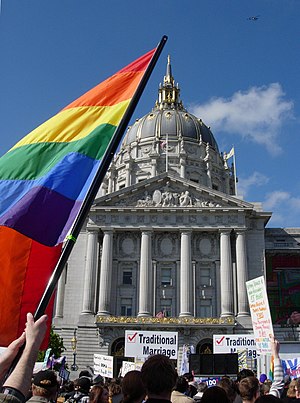 More than any other hot-button topic we cover on this program, it is the homosexual agenda being pushed from the highest office in the land that will – and in some cases already has – split the Body of Christ.  The Supreme Court will hear arguments this week in two cases that have the potential to transform American society and the status of gays and lesbians in the homosexual marriage debate.
On Tuesday, the justices will consider whether California’s voter approved ban on gay marriage, Proposition 8, unfairly discriminates against gay people. On Wednesday, they’ll consider whether the 1996 Defense of Marriage Act barring the U.S. government from recognizing same-sex marriages, even in states that allow them, constitutes federal overreach.

Now we know that homosexuality is not an unforgivable sin, and that we all need Christ as Savior. But how will these cases affect the Body of Christ? Will there be increased persecution? We believe the outcome of these two cases could transform the debate and the way churches are able to share about the Gospel: our fallenness, repentance, the true Hope of the world and forgiveness of our sins through the shed blood and resurrection of Jesus Christ.
Joining us in our first segment is William J. Murray, a strong advocate who speaks out against the persecution of Christianity in America and around the world as chairman of theReligious Freedom Coalition, a non-profit organization in Washington, D.C., and is active on issues related to aiding Christians in Islamic and Communist nations and founded ShariaFreeUSA.org. His mother was the founder of American Atheists was Madeline Murray O’Hair. You may remember that she also won the landmark lawsuit on behalf of her son William that effectively banned prayer in public schools. Thankfully William did not follow her path, and works to fight religious persecution around the world. (Check out his Capitol Hill Updates blog.)