Is the Church losing its salt? 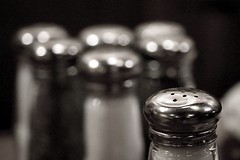 Have you heard of a movement called Christian Reconstructionism? It goes by another name: Theonomy, or Rule by God’s law. It’s a kind of Dominion theology that is not the same as the New Apostolic Reformation (NAR) dominionism. Confused yet? We’ll cover what this movement is all about later on.
First, what does it mean that believers are to be “salt?” Jesus used the concepts of salt and light a number of different times to refer to the role of His followers in the world. One example is found in Matthew 5:13: “You are the salt of the earth. But if the salt loses its saltiness, how can it be made salty again? It is no longer good for anything, except to be thrown out and trampled by men.”

We’re going to talk about being salt today, and why many believe the Church can and in fact in some cases has been losing its saltiness.
In our first segment, we’re talking with Richard Lee, a pastor from Spokane Washington who has something in common with Rob Bell: They both received their Master of Divinity degrees from Fuller Theological Seminary! But when you hear what Pastor Lee has to say about his formative years at Fuller, you’re going to get a better understanding of where this seminary has taken a sharp turn off the narrow path of truth.  Pastor Lee is also a radio host of an apologetics ministry called Richard Lee Ministries.