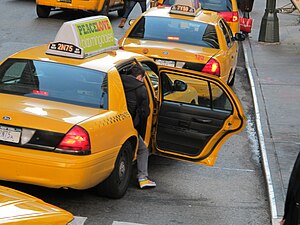 Hailing a New York cab as a Christian might just get you into some spiritually bumpy terrain. Especially if your cabbie has the new Taxi TV in his car.
This week hundreds of New York City yellow cabs are streaming short, guided meditations from yogi “extraordinaire”, Elena Brower, on Taxi TV. It’s part of a huge promotion for a film project titled, On Meditation, a PBS-style series which features meditators from Congressman Tim Ryan to author Peter Matthiessen, speaking about the practice and its benefits.
The New Age spirituality is upon us, whether we like it or not.
Says executive producer Rebecca Dreyfus, “The guided meditations are a fun innovative way to support the project’s kickstarter campaign and they offer passengers a moment to connect with themselves.”

The guided meditation taxi spots run through the end of the week.
PBS and OnMeditation.co have put together a video that passengers will view. I thought I’d share it here so that you can see what meditation proponents like Tim Ryan and others are so insistent on pushing: