Redefine Marriage and You Redefine America

Are you ready for a shift in the meaning of words like marriage, family, parent, and so on? Sharing this article today from Penny Young Nance over at the Christian Post: 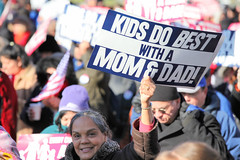 I was recently confronted with what some believe is a shift in public opinion on the issue of traditional marriage. The 75 Republican operatives who signed on to a Supreme Court brief calling for a federal ban on state traditional marriage laws were used as the latest example. It is difficult enough to stand against advocates on the Left but it is downright painful to have to stand up to people you thought were on your side. In some cases, it feels like a betrayal.
Why am I surprised? Because the marriage issue does not break down neatly along party lines; this is not a Republican or Democrat issue. For instance, according to Associated Press exit polls in 2008, 70 percent of African-Americans who voted for Barack Obama as president in California also voted for Proposition 8, the state constitutional amendment defining marriage as the union between one man and one woman. More than half of Hispanics, a group much coveted by both parties, also came down firmly on the side of traditional marriage.
The marriage issue is one of the most difficult issues to address for most people, including Concerned Women for America (CWA). It is emotional and deeply personal. It is much easier to advocate for issues like victims of sex trafficking, the sanctity of life, and the protection of victims of rape, fiscal restraint, or education. I personally find them much more rewarding. But CWA has always stood for truth, no matter who it offends, and we will continue to do so for marriage, no matter what happens at the Supreme Court. Same-sex marriage is not our only concern on the issue of marriage. High rates of divorce, unwed childbearing, and cohabitation are just a few issues devastating American families and children. We should rebuild and restore marriage, not redefine it. If we redefine marriage, then where will it end? We have already seen Hollywood embrace the idea of polygamy, a la Sister Wives. And abroad in Brazil, trio same-sex unions are legally recognized.