Why Christians should start talking about redefining marriage 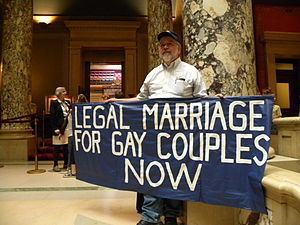 Many Christians avoid tough subjects like gay marriage and other charged topics because they don’t want to get into a heated discussion. But as we’ll hear from our two guests today, this conversation is one we can no longer avoid having. Why? Do we really expect to change the shifting national opinion on gay marriage, or change the culture?  No, that’s not it. We’ve been talking about the culture wars for some time on our program now, and you’ve heard us say over and over again that the only way a culture can change is by each one of us being willing to share the Gospel of Jesus as the hope of the world. (That’s another subject many Christians avoid!)

So why then, do we need to talk about Gay Marriage? Because this is the one issue that has already been re-defined as marriage equality, a civil rights issue, rather than a biblical issue. But an even bigger reason is that gay marriage is already re-defining the Church. And if your church isn’t talking about this yet,  consider the statistics: More and more churches are now being branded as “gay affirming.” But if you substitute the word “sin” before the word affirming, you can see we have a real problem in the Body of Christ.
Joining us in our second segment is Julaine Appling of Wisconsin Family Action, a fierce advocate for marriage, family, life and liberty. The education arm of this organization is Wisconsin Family Council, and here Julaine works to forward Judeo-Christian principles and values by informing citizens, churches and policymakers about important pro-family legislative and cultural issues so they will be inspired to get involved in preserving and strengthening marriage and family in Wisconsin.
In our first segment is author Scott Alan Buss. His many books include, “Fire Breathing Christians: The Common Believer’s Call to Reformation, Revival, and Revolution” and “Apathetic Christianity: The Zombie Religion of American Churchianity.” He has two new projects soon to be released: “The America Idol – How Christ-less Patriotism Destroys a Nation,” and, “Suprahero – Jesus as the Source of Superheroes.” Check out Scott’s blog here.