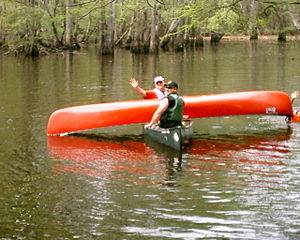 (Reuters) – The Boy Scouts of America on Friday moved to partially lift its long-standing ban on gays, with a decision that would allow openly gay youth members but continue to bar gay adults in one of the largest youth serving organizations in America.

If the resolution is approved in a nationwide vote in May, “no youth may be denied membership in the Boy Scouts of America on the basis of sexual orientation or preference alone,” Deron Smith, the organization’s spokesman, told Reuters.

The report found religious groups linked to the Scouts were concerned with homosexual adult leaders not with youth and concluded “a change in the membership policy specific to youth only would be consistent with the religious beliefs of the BSA’s major chartered organizations.”

“By refusing to consider an end to its ban on gay and lesbian parents, the Boy Scouts have missed an opportunity to exercise leadership and usher the organization back to relevancy,” said Rich Ferraro, Vice President of Communications at GLAAD, which promotes lesbian, gay, bisexual and transgender rights.

The resolution is the result of a study Smith called “the most comprehensive listening exercise in the history of Scouting” that found parents in three of four U.S. regions opposed the current membership policy.

While the issue remains divisive, “parents, adults in the Scouting community, and teens alike tend to agree that youth should not be denied the benefits of Scouting,” concluded the study, which surveyed members, parents, religious groups and local councils.

“The Boy Scouts did not have an easy task and they decided that it does not make business sense to go forward with a policy that’s being left in the dustbin of history,” said Patrick Boyle, whose 1994 book “Scout’s Honor” examined sexual abuse in the Boy Scouts of America.

“It wasn’t very long ago that these guys stood before the Supreme Court and said that denying gays membership was a fundamental cornerstone belief of their organization,” Boyle added, citing a 2000 Supreme Court ruling that granted the Boy Scouts the right to uphold their membership policy.

The BSA’s decision comes amidst larger shifts in gay rights legislation in the United States. In the coming months, the Supreme Court will rule on whether to strike down parts of a federal law that defines marriage as the union between a man and a woman, and in 2011, a law that barred openly gay individuals from serving in the military was repealed.

Though it is unlikely to put the debate to rest, the BSA’s vote in May will conclude months of public and internal debates that divided the youth group’s organizers, polarized its corporate and religious sponsors, and placed the organization at the center of a nationwide debate over gay rights.

Chuck Small, a BSA adult leader and the parent of 10- and 12-year-old scouts in South Carolina, welcomed the latest change.

“It’s a hard and divisive issue, but what it comes down to is that we learn more from people who are different from us than people who are like us,” Small said.

“I want my boys to have that opportunity to learn from as many people as possible.”