Jay Bakker, whom we reported last month as denying Jesus Christ’s substitutionary atonement for our sins, is starting a new church called Revolution, which currently meets in a candy store. Bakker is part of the re-emerging Emergent Church, a movement that some were hoping had died out. Oh no; it is alive and well. 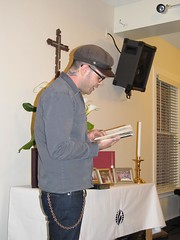 Erin Benziger over at the Christian Research Network reports this:
Jay Bakker, son of televangelists Jim Bakker and the late Tammy Faye Bakker Messner and self-labeled ‘evangelical punk preacher,’ has moved from New York to Minneapolis with intentions of starting a new church in the Midwest city. Bakker was one of the first to be involved in what is known as the Emerging Church movement. The Minneapolis Star Tribune notes that there appears to be a growing affinity for this movement in the city where Bakker’s parents first met.

Bakker’s Brooklyn church, Revolution, currently meets in a bar called Pete’s Candy Store and the unconventional pastor is seeking a similar venue for his new congregation.

Bakker is looking for a Minneapolis location where he can mimic this stripped-down form of worship. No live band or music, no ornate trappings or traditions. Participants can talk about most any religious subject matter. Members of Emerging Church congregations like Bakker’s have often become disillusioned with institutionalized religion. Source

The Emerging Church is well-known for its postmodern approach to theology, where everything can be questioned and where nothing can be definitively known. It is a liberal approach to the Christian faith that is willing to call into question and even reject clear biblical truth. This is demonstrated in the Star Tribune’s description of Bakker:

Bakker is liberal-leaning on social issues and a fervent gay rights supporter. He has married same-sex couples in New York where the practice is legal. Source

Nevertheless, the Emerging Church and its flexible theology continue to be attractive to many.

Tony Jones, a theologian-in-residence at Solomon’s Porch in south Minneapolis, one of the most prominent emerging churches in the country, is close friends with Bakker and believes his brand of Christianity will be attractive in the Twin Cities. Source

Both Jay Bakker and the above-mentioned Tony Jones recently made headlines for their apparent rejection of the doctrine of penal substitutionary atonement. Such a rejection or questioning of the clear biblical teaching on this topic offers further insight into the dangerous teachings of the emerging movement.