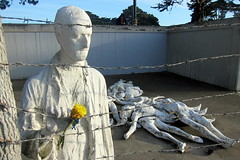 Did you know that evangelical Christians are so extreme, we are now being profiled by our own military? Yes, the Army is now warning that Christians are the No. 1 extremist threat to America – ahead of groups like the Muslim Brotherhood, KKK, Nation of Islam, al-Qaida, Hamas and others. We’ll cover that story, plus an article from a former student of Liberty University – that’s a Christian collage – tells of how antics, events and a counselor at the school have convinced him to embrace a gay lifestyle. And a major hoax is apparently painting Joel Osteen as an atheist.  (It has fooled many, and yes, we were fooled for a few minutes as well.)

But first, today is the day we remember the holocaust. The internationally recognized observance corresponds to the 27th day of Nisan of the Hebrew calendar. In the first segment, we’re checking in with Laurie Cardoza Moore, founder of Proclaiming Justice to the Nations (PJTN), about Christians in Israel and Palestine. Laurie is here to share some insight on where our U.S. political candidates stand on some important issues in the Middle East, in particular with our presidential election coming up. PJTN is a ministry to educate Christian believers about biblical truth as it relates to Israel, and the dangerous lies that we’re being told in the West about the true nature of events in the Middle East.