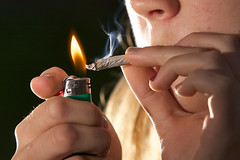 Engaging with the culture without embracing it is getting much harder for Christians, especially when the Church itself is looking more and more like the world. With 70 percent of our youth leaving the Church – and their faith – once they graduate high school, you have to wonder why. (See Top 10 Reasons Our Kids Leave the Church.)  That’s why it comes as no shock to learn that almost half of millennial Christians believe that smoking pot is no big deal and should be legal. The shift from inside the Church has begun. Is your Church standing strong against the wafting smoke of change?

Half of young Christians have bucked the opinion of their older brethren and said they favor legalizing marijuana for recreational use, according to a recent poll.
Thirty-two percent of Christian’s aged 18-29 said they “strongly favor” legalization, while 18% said they “favor” the move, according to a Public Religion Research Institute survey released Thursday. Among Christian’s 65 and older, only 9% said they strongly favor legalization and 47% say they strongly oppose it.
Though the younger generations favor legalization, all Christians still lean toward keeping the drug illegal. While 39% of Christians say they favor or strongly favor legalization, 54% say they support keeping the drug illegal, according to the poll.
According to the poll, 45% of young Christians have “tried marijuana,” compared to 13% of Christian seniors who say they have.
“Nearly two-thirds (65%) of Americans who report they have ever tried marijuana support legalizing marijuana,” the report says. “While an identical number (65%) of Americans who report that they have not tried marijuana oppose its legalization.”
“Marijuana legalization connects to a broader generational story that we are seeing in religious culture,” said Robert P. Jones, CEO of the polling firm. “The younger, religious Americans are taking a lot of their cues from their generational cohorts. To be sure, they are colored by their religious affiliation.”
Jones continued: “The generational sea change on this issue is also shifting the ground inside churches.”
Marijuana, while a longtime political question, was thrust to the forefront of debate in 2012, when two states – Washington and Colorado – legalized use of the drug for recreational use. That same year, Oregon voted to keep marijuana illegal.
In Washington, legalization was a way to raise tax revenue. The Washington referendum called for a 25% tax rate imposed on the product three times: when the grower sells it to the processor, when the processor sells it to the retailer, and when the retailer sells it to the customer.
Marijuana use, according to the poll, is not seen as a sin by a majority of Americans.
Seventy percent of Americans said that recreational use of marijuana is not a sin, compared to 23% who said they believe using the drug is sinning. While most religious groups follow this trend, according to the poll, white evangelical Protestants are the most divided group, with 40% indicating using marijuana is a sin and 48% saying it is not.
These results have led poll organizers to believe marijuana use will continue to gain more acceptance in the coming years.
“Much like same sex marriage, what we are seeing here is generational replacement,” Jones said. “As more young Christians come to adulthood, they bring with them different experience and views.”
After electoral victories in November, the good news for those in favor of marijuana legalization keeps on coming. In early April, the Pew Research Center for the People and the Press released a poll that found 52% of Americans favored legalization, compared to 45% who favored keeping marijuana illegal.
This was the first time in the history of the Pew poll that legalization has been in the majority.