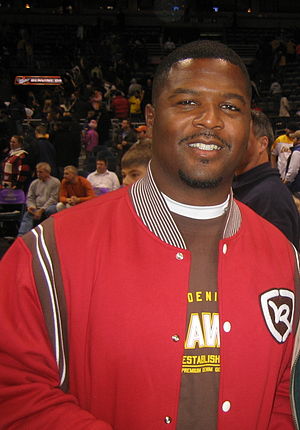 I know ’round these parts (We broadcast from near Green Bay), the Packers are a pretty big deal. Did this church do the right thing?
Ex-Packers star LeRoy Butler loses speaking gig at church over support for gay athlete
Story via Gannett Wisconsin Media/Post Crescent

Former Green Bay Packers safety LeRoy Butler said Wednesday that a Wisconsin church canceled his July appearance because he tweeted congratulations to NBA player Jason Collins, who revealed Monday that he is gay.
Butler said he has previously spoken at the church, which he declined to identify.
“I speak about not bullying people and then I do a football camp,” he said.
But Butler said a church representative called him Tuesday night inquiring about the tweet, which said: “Congrats to Jason Collins.”
“They asked, ‘Did you go on Twitter and congratulate some gay guy?’” Butler said. “I said, yeah, a basketball player who came out.
“They said, ‘Well, we can’t have you talk about that.’ Not that it was what I was going to talk about anyway, but I said, ‘Why not?’ And they said I had to talk to the pastor, and that’s when it got heated. I don’t know the exact Bible verse, but he was telling me that God doesn’t like homosexuals.”
Butler said he was to be paid $8,500 for the private appearance, but that the speaking fee comes from sponsors, not the church.
“They said, ‘If you apologize and take the tweet down and ask God for forgiveness, we’ll let you speak,’ and I said I wouldn’t do that,” he said.
“I wasn’t trying to be political or anything, you know me, I love everyone, and I just want come speak to the kids and help the kids, but the pastor said some parents said if the speaker supports gay and lesbians we will not attend.”
Collins is the first active player in the four major U.S. professional sports leagues to come out. He did so in a first-person story published in Sports Illustrated.
“I don’t get upset a lot, but last night, I was upset,” said Butler, who tweeted the exchange with the pastor late Tuesday night.
“It’s not political. I teach my kids to mind their own business and love everyone.”
Butler, 44, played for the Packers from 1990 to 2001. He since has had several business ventures, has worked in motivational speaking and broadcasting and has a charitable foundation. He was inducted into the Packers Hall of Fame in 2007.