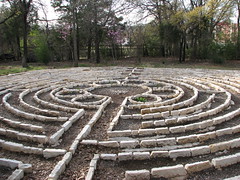 Lighthouse Trails is reporting today more troubling news about the contemplative prayer movement rushing into the evangelical/Protestant church. Reporters there say the news is not good, and that it has shaken them because the evidence points to the evangelical church “succumbing to an apostate mystical revolution, and a growing number of today’s Christian leaders are party to it either by way of promotion or by way of apathy.”
The group says it has learned deeply concerning news about Moody Radio becoming increasingly contemplative, promoting “prayer labyrinths” and other Spiritual Formation programs. Here is a snippet of the report, and you’ll want to click on the link below to read the entire article with linked resources:

One of the long-standing Moody Radio programs is Midday Connection. Lighthouse Trails has addressed this program on a number of occasions because of the continued promotion of contemplative and emerging figures through interviews on the show. On Thursday, June 6th, 2013, a Lighthouse Trails reader informed us that on June 3rd on the Middday Connection radio program, Moody hosts Anita Lustrea (with Moody since 1984) and Melinda Schmidt discussed Lustrea’s recent graduation from the Christos Center for Spiritual Formation. According to the women’s discussion, Lustrea was awarded a 2-year Certificate in Spiritual Direction. On the program, Schmidt acknowledged that Lustrea would incorporate what she had learned over the past two years into Midday Connection, and Lustrea told the audience that Schmidt would be starting the same 2-year program this fall.
This is very significant and troubling news to learn. The Christos Center teaching team consists of several ”spiritual directors” who have been trained at the interspiritual, panentheistic Shalem Institute in Washington, DC. The Christos Center emulates the same spiritual view and teaches the same mystical practices as Shalem.  The 2-year certificate in Spiritual Direction that Anita Lustrea received this year (and Melinda Schmidt hopes to receive in 2 years) is taught by these Shalem-trained spiritual directors from Christos.