The Eucharest: the New Evangelization targets you, Christian! 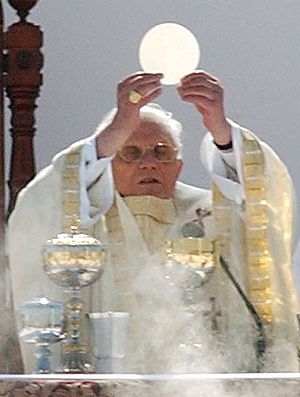 If you are horrified by the teaching that the wafer offered in the Catholic mass is actually the flesh of Jesus Christ which you must eat to be right with God, you might want to understand that there is an intentional campaign going on to get you to drop your disgust and embrace this idea.
It is being promoted by the Catholic system, with a heavy push from many evangelical leaders. Some of those are heavyweights with lots of influence.
We’ve talked before about the “Evangelical Catholicism” movement, and how it will be used in these last days to bring about and shape a one-world religion. Saddleback pastor Rick Warren is a huge part of this movement, and he recently  endorsed this year’s  “Catholics Come Home” book calling Catholic evangelization “critically important.”
Here is a part of a chapter from Roger Oakland’s book, Another Jesus , originally shared at the Lighthouse Trails blog:

“The New Evangelization”
by Roger Oakland

Not everything labeled the gospel is the true Gospel. Further, it follows that the term evangelization, if it is based on a counterfeit gospel, will seduce people into believing they are going to heaven, when instead they may be on their way to hell.
The New Evangelization [is] a program currently being promoted by the Catholic Church and designed to win the world to Christ—the Eucharistic Christ.
What is the New Evangelization?
While reading a book or an article, have you ever come across a term you have never seen before and suddenly your mind was illuminated? Just as if a light switch was turned on and a darkened room was lit, the significance of what you read became apparent. Such was the case for me when I came across the phrase the New Evangelization.
I was reading an article published by Zenit (The World Seen from Rome) that presented a news item based on statements made by Pope John Paul II. The article caught my attention because it was about an announcement the pope had made about the Eucharist. The article was titled “Why the Pope Would Write an Encyclical on the Eucharist: To Rekindle Amazement.”1
While I was already aware the pope had declared the Eucharist to be the focal point for the Catholic Church’s missionary vision at the Eucharistic Congress in June of 2000, the idea that the pope had written an Encyclical on the Eucharist to “Rekindle Amazement” in the Eucharist was new to me. I found the following statement made by the pope very enlightening:

[T]he Church will only be able to address the challenge of the new evangelization if she is able to contemplate, and enter into a profound relationship with Christ in the sacrament that makes his presence real.2

For me, this statement helped solve a puzzle that was now beginning to fall into place—this new evangelization program was directly linked to the Eucharistic Christ.
Further, the Zenit article gave more details on how the pope wanted to see this program develop:

I would like to rekindle this Eucharistic “amazement” by the present Encyclical Letter, in continuity with the Jubilee heritage which I have left to the Church in the Apostolic Letter Novo Millennio Ineunte and its Marian crowning, Rosarium Virginis Mariae. To contemplate the face of Christ, and to contemplate it with Mary, is the programme which I have set before the Church at the dawn of the third millennium, summoning her to put out into the deep on the sea of history with the enthusiasm of the new evangelization.3

Making it clear that the new evangelization program would be tightly associated with the sacrament of the Eucharist, the pope concluded:

To contemplate Christ involves being able to recognize him wherever he manifests himself, in his many forms of presence, but above all in the living sacrament of his body and his blood. The Church draws her life from Christ in the Eucharist, by him she is fed and by him she is enlightened.4

The Facts about the New Evangelization
To find out more about this New Evangelization program, I decided to look for more information. It did not take long tofind out there were many sources available confirming such a program existed. One article that was particularly helpful was found on the EWTN (Eternal Word Television Network) web site. Under a heading “The New Evangelization: Building the Civilization of Love,” I read:

As the Holy Father entrusts the Third Millennium to the Blessed Virgin Mary, EWTN inaugurates it’s New Evangelization specialty site. This site will forever be a work in progress, as we continue to bring to you information about the Catholic Faith on the 5 continents. We hope that the information on the synods will be a help to those whose mission is to evangelize, a mission which belongs to all of us at least through prayer. The historical, statistical and devotional material should give every visitor a sense of the universality of the Church and its mission.5

Then one additional and very significant statement:

Under the protection of St. Therese of Lisieux, Patroness of the Missions, and Our Lady of Guadalupe, to whom the Pope has committed the New Evangelization, may the Spirit of God bring about the New Pentecost to which the Church looks forward with hope.6

This above statement may come as a surprise to Protestants who are enthusiastically joining hands with Catholics for the sake of evangelism. The Catholic program is committed to “Our Lady of Guadalupe.” Furthermore, it would be good to check out what is meant by this “New Pentecost.” Paul also warned the Corinthians about “another spirit” that was associated with “another gospel” and “another Jesus.”
Read the entire article