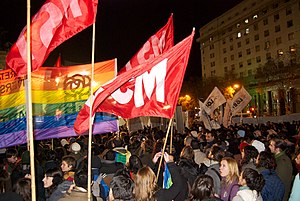 Right at this moment, the U.S. Supreme Court is convened and is expected to deliver rulings this morning in two high-profile cases with national implications on gay marriage.
The highest court will issue rulings  – perhaps within this hour – in the last three cases of its current session, two of them on same-sex marriage. The justices will rule on the constitutionality of a federal law that denies benefits to same-sex married couples and a California state law that bans gay marriage.  Thousands of people on both sides of the issue are gathered and waiting for the ruling, we will cover that story as it develops.

We’re also going to tell you about a disappointing ruling in the state of Texas on a controversial abortion bill, plus several other stories developing.
We’re going to kick off our first segment today talking about sharia law and the controversy over Islamic issues in the United States. Joining us is an outspoken voice who is sounding the alarm on his concerns. Walid Shoebat is a Christian who converted from Islam and says he was a radicalized Muslim willing to die for the cause of Jihad. The ex-terrorist was with the PLO and Muslim Brotherhood before the Holy Spirit grabbed hold and he converted to Christianity. Walid now lectures on the dangers of Islamic radicalism and is a strong supporter of the state of Israel.
Read more on Walid Shoebat’s blog.