Even Bill Maher knows what the Bible says, Jim Wallis. 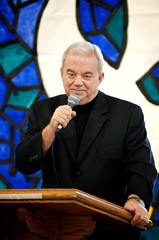 In a recent broadcast of the talk show Real Time on HBO, leftist political commentator and host Bill Maher and his panel of guests – including liberal “minister” Jim Wallis, editor of Sojourners Magazine and adviser to Barack Obama – debated their thoughts about the Bible, asserting that God is a “pro-slavery,” “homophobic,” “psychotic mass murderer.”

During the discussion, Wallis contended that the Bible mostly focuses on taking care of the poor and disadvantaged, and is not against homosexuality.

“Too many people thump their Bible and not read it,” he asserted. “I want to be a follower of Jesus and not a defender of religion.”

Even Maher was stumped at that one, knowing that at the very least the Bible does not condone homosexuality.

“But Jesus is in the Bible, and let’s not beat around the burning bush, the Bible hates [homosexuality],” Maher replied. “That’s clear. I mean, I could read you the passages…”

Christian News Network picks it up from here:

“I always wonder when I talk to religious people, how do you reconcile this idea that it all comes from the Bible, but the Bible is so flawed,” he continued. “It’s either full of nonsense or viciousness.”

Wallis then began to discuss a recent evangelical rally that he participated in that focused on immigration reform, and asserted that the Bible is more interested in kindness to strangers than sexual activity between those of the same gender.

“But you’re cherry picking the good parts,” Maher replied. “Explain to me how a book that is written by God, who is perfect, there’s so much–it’s pro-slavery, pro-polygamy, it’s homophobic, God in the Old Testament is a psychotic mass murderer–I mean, there’s so many things in it. I always say to my religious friends, you know, if a pool had even one turd in it, would you jump in?”

The audience then began laughing and clapping.


“But Dr. [Martin Luther] King used that same Bible, [and] he evoked it to overcome discrimination,” Wallis said. “Jesus didn’t talk about homosexuality at all; the Bible talks about the poor again and again and again.”

“Most of my life, I have been fighting the fundamentalism in Christianity,” the author of On God’s Side continued. “Fundamentalism is bad.”

“Fundamentalism is just reading what’s there and taking it literally,” Maher contended.

During the discussion, former New York State Governor Elliott Spitzer, who resigned from his post in 2008 after the discovery of his involvement in a prostitution ring, stated that “fundamentalism” needs to be kept out of politics.

“We’ve got to embrace those voices from the religious community who find in the Bible a progressive argument,” he said. “What’s happened in our politics is that we’ve let fundamentalist religion dictate our political discourse…”

However, some have strongly disagreed with Maher and the panel.

“Here’s another human thinking he can judge God. Such arrogance,” one commenter stated. “Atheists want all the answers to His ways and God doesn’t allow that, so they’re off to pouting about it and taking others down with them.”

“Actually the God of the OT is the same as the God of the NT, and in all instances of the Bible God gave everyone several chances to turn from their wicked ways before he allowed them to be destroyed,” another said. “The Bible is not pro-slavery. The ‘slavery’ back then was more like servitude to pay off debt. Once your debt was paid off you were set free. In fact there is only one instance of race-based slavery and that is when Pharaoh enslaved the Hebrews and God destroyed Egypt for it.”

“In truth, [God is] a righteous judge who gave people a chance repent and they refused. Nowhere in the OT did God send judgment without sending a prophet preaching repentance before hand. And the people ignored it,” a third explained. “Remember, Noah preached for 120 years. And everybody ignored him. The door of the ark stayed open and anybody who wanted to enter could. When God closed the door, the door was closed. Period. Our door is Jesus. And that door won’t stay open forever either.”

The Seams in Satan’s Godzilla Suit

Bible study – in a morgue?

Granger removes "church" from its name

The influence of Rachel Held Evans