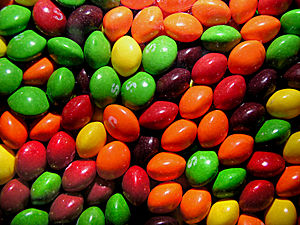 Nothing quite says the Body and Blood of Jesus Christ quite like Skittles candy and a sip of iced tea. But if you’re doing a church service to honor Trayvon Martin rather than Jesus, it makes sense in a strange sort of way. Shortly after the now-famous incident last year, this pastor made sure to mention that the blood of Martin was “crying out from the ground.”

But wait, this story gets even more bizarre. Yesterday it was reported by several sources that a mixture of Skittles and grape cough syrup may have been consumed by Martin to produce a drug-induced high on the eve of his death:

We know that Trayvon Martin had marijuana in his system on the night he tried to kill George Zimmerman, and had been suspended from school for using marijuana. Some believe he was a drug dealer. You might assume his famous mission to acquire Skittles candies and Arizona iced tea (actually watermelon juice, but the media is only good at narratives, not factual details) was a classic example of a pothead with the munchies. Here’s another theory:

RashManly.com accuses Martin of admitting on his Facebook account as early as June 27, 2011 of being an abuser of a codeine, soft drink and candy beverage popularly known as “Purple Drank” or “Lean.” …

Purple Drank is commonly used by Southern Rappers and “wannabe suburban teenagers” according to Urban Dictionary.

By mixing some cough syrup with the juice and Skittles, Martin could have produced some Purple Drank.

The Last Refuge backs up the theory with extensive documentation.

Purple Drank has been referred to as the “poor man’s PCP” due to its potential effect of turning users into psychotic maniacs. A habit of indulging in such drugs might explain why the media’s little darling attacked a neighborhood watch captain and attempted to dash out his brains against the pavement.

Four Christians arrested in Libya for spreading the Gospel