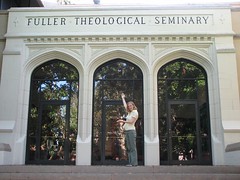 The nation’s first LGBT student club sanctioned by a major evangelical seminary is causing  a stir by announcing it will hold several gay rights rallies on campus this fall.

Fuller’s policy, in case you were unaware: Students can “come out” but they can’t have sex, be politically active or challenge a school policy that states homosexual sex is “inconsistent with the teachings of Scripture.”
Nick Palacios identifies himself as a gay evangelical Christian seminarian, and president of the nation’s first LGBT student club sanctioned by a major evangelical seminary. The group, called OneTable, formed last fall at Fuller Theological Seminary in Pasadena, one of the world’s largest multi-denominational seminaries, and has attracted about three dozen students.
Read the story here