Common Code for the whole world

This will probably sound paranoid, but I got a strange feeling when I heard about the world’s governments, Hollywood celebs, schools, news outlets, big business and social media moguls coming together in complete lockstep (even – gasp! – Democrats and Republicans!), to promote something called Hour Of Code.
It’s not the same tingling as what happens to Chris Matthews’ leg whenever Obama says something his speechwriters came up with, but more along the lines of, “what in the world – why?!?!?”
The Hour Of Code is allegedly a worldwide (166 nations) public campaign to get kids interested in computer science, and grownups to realize that computer training is important.  It kicked off this morning when Google officially changed its search home screen to this: 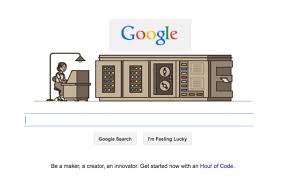 So I followed this link to the promotional video and websites. (curiously, these sites work perfectly, unlike the Obamacare debacle, but I digress.)
What’s going on?

As the Wall Street Journal reports, the approximately $1 million campaign was launched by Code.org, a nonprofit organization that has so far raised $10 million from supporters like Mark Zuckerberg, Bill Gates, and major technology companies. More than 33,000 schools in 166 countries will dedicate at least one hour this week to computer science education as part of Code.org’s initiative, which is timed to coincide with this year’s Computer Science Education Week.
The effort has earned endorsements from tech companies, celebrities, and politicians, including both President Barack Obama and House Majority Leader Eric Cantor (R – VA), who each released video statements urging students to participate.
“Don’t just download the latest app, help design it,” Obama said in a video address released this week. “Don’t just play on your phone, program. No one’s born a computer scientist, but with a little hard work — and some math and science — just about anyone can become one.”

Source
Tech Crunch reports that the campaign is now featured on the home pages of Yahoo, Youtube, Apple, MSN, Bing and Disney throughout the week, and a bevy of politicians, stars and athletes will also be pitching in to draw attention to the campaign.

Among the recognizable names are actors and musicians like Shakira, Ashton Kutcher, Angela Bassett and athletes like Chris Bosh, Warren Sapp and Dwight Howard, along with tech leaders like Steve Jobs, Bill Gates, Mark Zuckerberg and Susan Wojcicki. It’s also refreshing to see politicians from both sides of the aisle come together to support one nation, under code. Obama, House Majority Leader Eric Cantor, Senator Cory Booker, Newt Gingrich and Secretary of Education Arnie Duncan are among those releasing videos tonight in support of the “Hour of Code.”

Source
Here’s the Obama plea for ALL Americans to get behind this, for our country’s future:

And in case Obama can’t convince you, big name celebs made a film of their own:

Why now?
In a time when Common Core standards and curricula are being implemented at an astounding rate by our government, the public education efforts in the United States continues to try to figure out how to impart the basic skills we really need, like how to read, how to write, and how to add, subtract and multiply.  Do we understand how common it is for college freshmen to struggle to put together the basic paragraph, or balance their new digital bank accounts?
I know, I know. Perhaps the little hairs prickling up on the back of my neck is an extreme reaction. So I’m an extremist. But is anyone else even asking questions, like why this, and why now?
UPDATE:
Click here to start connecting some dots (Hat tip: Mary Danielsen)