How safe do you feel?

Would you rather be safe, or sound? You may someday need to make that choice. We know that things are heating up in the Middle East in places like Syria and Egypt. But with increasing headlines about the U.S. Muslim Brotherhood, and now a report of that organization being a presence in the White House, we need to pay attention. When we hear words like “jihad” or “sharia” as

Christians, we need to ask not only what those words mean, but how they are defined by those who believe in them to be best for the West.
Ryan Mauro is a national security insider, and author of a recent article we are talking ab out today titled, Islamists In America: Skilled at Hiding Common Roots. You can find it on The Clarion Project.org, a news source Ryan founded to share inside information the mainstream media doesn’t tell you. 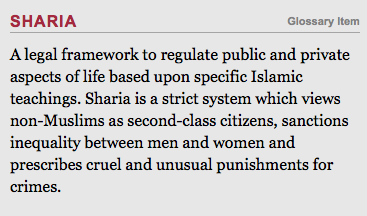 Ryan is also founder of  WorldThreats.com, and RadicalIslam.org. and an intelligence analyst with the Asymmetric Warfare and Intelligence Center. Ryan has done extensive research for the Reform Party of Syria, a group dedicated to bringing democracy to that country. In 2005, he published his first book, Death to America: The Unreported Battle of Iraq, about the conflict in the Middle East.
Ryan has provided our listeners with a free DVD of the movie, Obsession. Just go to THIS LINK and type in the password “LeMay.”