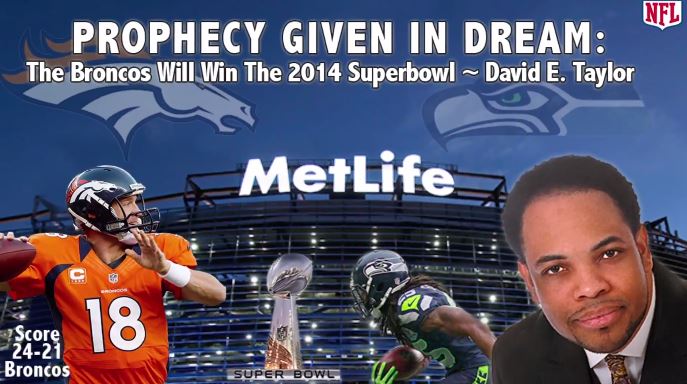 One of the more controversial (most commented on) articles we’ve done is about a charlatan in Michigan (with a St. Louis P.O. box)  named David E. Taylor. (See “False Prophets: Here come more wolves,” and be sure to read the comments section.)
This self-appointed “Apostle” has a FiveFold Ministry in which he hosts Dream Schools and healing events.  But make no mistake, he is a false prophet.  In this sad but funny video, David is back with a vision God gave him in a dream that the Broncos will win the Superbowl:


Remember, if anyone claims to speak for God by prophesying something that does NOT come true, they are a false prophet.
While the Superbowl video was sort of funny, this next video is chilling. This man is leading people straight into Hell, and we need to be on our knees for these followers.


David has written a book telling readers how they, too, can have face-to-face encounters with “Jesus Christ,” and one young boy shared his own trip to heaven in which he was told that Jesus is no longer on His Throne because Jesus is busy roaming the earth with David doing his ministry work. While I can’t say what this boy saw and experienced, I will point you to the website:

It is the heart of David E. Taylor that every Christian, saint, believer pastor and 5 fold ministry officer experience this face to face relationship with the Lord through appearances and that their whole life and ministry flow out of it. Just as the early church and the patriarchs of old had. He also teaches that this experience and face to face relationship through Jesus appearing was not just for their time but it is also for our time as well.
Each aspect of the unusual special ministry that the Lord Jesus has given David E. Taylor is birthed out of this intimate face to face relationship as a result of the Lord appearing to him.  The dynamic evangelistic miracle healing ministry that the Lord has given to Him has been graced by Jesus telling him in heaven in the year 2000, that He would personally come down on earth in every one of the miracle crusades that he holds and walk among and in the midst of the people in the glorified body that He rose from the dead in 2000 years ago. Jesus told him to encourage the people with these words that He Jesus their Saviour and Healer would come and touch them and heal them especially and specifically those who are bound by wheelchairs. This has been evidently seen by the phenomenal miracles that has taken place and happened to tens of thousands of people over the years. Jesus visited David and told him he had been ordained to be a Healing Shepard to America and the world.  The term “Healing Shepard” had never been heard by him the way that the Lord said and articulated it in this phrase.