Ecumenicism and the Alpha Course 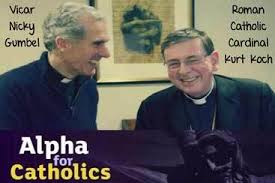 Here is an update on the Alpha Course, a program that was started by Nicky Gumbel at the Anglican church in London. This church was the center of the holy laughter movement in England and Europe, and has been known for services that include being “slain in the spirit” and behaviors such as uncontrollable laughter, spasms, loud animal-like noises and physical manifestations during emotionally driven services. In some cases, these elements have found their way into the teachings of this course. (Gumbel is also a member of Tony Blair’s Faith Foundation.)
Among the many more prominent leaders to endorse ALPHA are Rick Warren, Bill Hybels, Tony Campolo,  Tim Keller, J. I. Packer and others. And starting this week, Willow Creek will offer Alpha. Ken Silva over at Apprising Ministries revisits the Alpha Program with this robust report about the ecumenical nature of a program that is uniting Catholics, Evangelicals and others in a way that is blurring the lines: