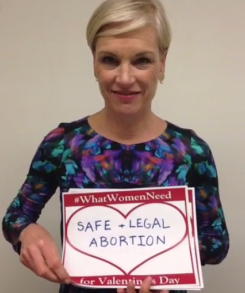 By now the world has seen the horrendous valentine’s idea: What women need,” shared by the president of Planned parenthood. Cecile Richards claims that what we all need is to be able to safely slaughter human beings at abortuaries. Ingrid Schleuter, a guest on Stand Up For The Truth, has penned the following response over at Pro-Life Wisconsin:

What Women Really Need
Apparently overcome by a sense of romance, Cecile Richards, President of Planned Parenthood, released a Valentine’s Day message for social media. According to Richards, what women really need on Valentine’s Day is not a pretty card, a gift of chocolate or a nice dinner out with the one they love. In the twisted world of the abortion industry, what women need is the freedom to kill their own babies.
A European news site recently featured a story about Hitler’s notorious Furies—the females who participated in murdering Jewish men, women and children during the holocaust. The photos in the piece showed these she-monsters smiling calmly at the camera. The comments below the news story were filled with outrage and disbelief that any women could so go against all instincts of nurture and compassion and murder helpless people, including children.The cool smile of Cecile Richards promoting child killing, without a conscience and in the name of love, is a stark reminder that the battle to defend innocent life goes on.
Cecile Richards is wrong. What women need is not access to “safe and legal abortion.” Abortion is never safe as it always ends in death for one and lifelong scars for the other. As for abortion being legal, abortion will never be legal in the eyes of God.
What do women really need? As a woman, I can answer that. Women need real men who will step up and take responsibility for the children they father. Women need a renewed love and a heart of compassion for the babies of their wombs that they chose to create by engaging in sex. What women need is protection from the merchants of death who trade in the blood of the innocent. What women need is a culture that embraces the commitment of marriage and that shows respect for all life. What women need is eyes to see the malignant lies of Planned Parenthood, and what women need is to see that bloody enterprise close down once and for all. God haste the day.               Source