The (church built) Zombie Apocalypse is upon us… 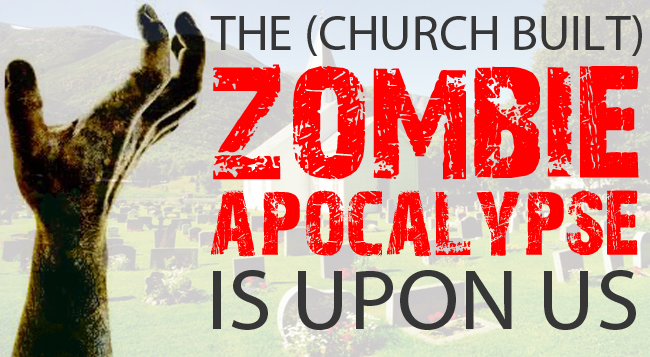 “I don’t read the Bible very much, and I really don’t want to.”

She spoke calmly and clearly, sitting there as we talked over the kitchen table the way we had a hundred times before. Then, between sips from a favorite black coffee cup, she almost casually elaborated, “And I don’t feel bad about it at all. I really don’t.”

I say “almost casually” because she was clearly charting a course methodically and with purpose, yet there was also a certain nonchalant, matter-of-fact coolness to her delivery that either was cover for a deeper struggle that she wished to avoid, or an honest representation of the position to which she had resigned herself on the matter. I couldn’t tell which.

Her contentedness seemed to grow with every passing syllable. This was accompanied by a quickening of pace, as though there was something important waiting on the other side of her presentation.

“I know I’m supposed to [feel bad], but I don’t. I know that [the Bible] says to do certain things that I don’t do, but I don’t want to do those things and I don’t plan to do them, to be honest. I’m fine with that, really.”

By now she was beyond calm and well into a silky smooth autopilot mode. She had the confidence of the fit, self-aware, forty-something career-minded woman that she was.

“I don’t care if I just barely make it in; I’m just glad to be going to Heaven.”

And there it was: The Point.

I can remember those few sentences as if they were spoken to me only yesterday, though now many years have passed since that particular moment with that particular woman in that particular kitchen. Then, as now, I was struck by her ever-so-freely offered words, though time has brought increased clarity – and increased alarm – over their meaning.

She was not doing and had no interest in doing what she already knew the Bible had to say about this, that, or the other thing, and she certainly didn’t have any desire to learn more about what it might say about the other other things she hadn’t already accidentally discovered, but she was happy, confident and oh-so- comfortable in the embrace of the soothing notion that she was, in fact, at the end of the day – or at the end of her days, Heaven bound.

If there was one thing that she knew about eternity – her eternity, it was that she was securely saved and going to that beautiful place.

Her pastor told her so.

Her church told her so.

Her friends told her so.

Practically everyone in her Bible Belt American culture told her so.

And they all go on telling her so. Seven days a week and twice on Sundays.

This is the primary mission and consequence of the dominant religion of post-Christian America, which also just happens to be the religion that spearheaded the inauguration of America’s post-Christian era.

Its god isn’t angry at anyone. He’s far too nice for that; a whole lot more like Santa Claus than Yahweh, to be sure.

Its gospel isn’t a command to repent and turn from sin so that one might avoid the coming righteous judgment of a holy, distinctly un-Santa-like God. It’s more of a pleading request from a weak, undemanding wannabe messiah/therapist who is just begging you to get out of the line going to hell (if there really even is such a place) and get into the line going to heaven, so that you might instantly and permanently qualify for his no-strings-attached, super-sized plan for your best life now.

It’s that last bit – the “in Jesus’ name” part – that really does make all of the difference here. It’s the spark that has ignited the engine. It is through His name that credibility has been attained, ministries have been founded, and empires have been built, and it is through the abuse of His name, nature, Word, and Gospel, that this credibility, these ministries, and these empires have been empowered to twist and hold those who profess Him as Savior into a position of direct opposition to Him as Lord.

In His name, we have been called to abandon good and righteous judgment.

In His name, we’ve been called to make man’s happiness the center of all things, including religion.

In His name, we’ve been called to tolerate and even love the things that He hates.

In His name, we have been called to “be nicer” than…Him.

In His name, we have witnessed the construction of the very machinery now used to most effectively malign His holy name, openly mock His perfect truth, and wage war on His chosen people.

THE CHURCH OF THE LIVING DEAD


See to it that no one takes you captive by philosophy and empty deceit, according to human tradition, according to the elemental spirits of the world, and not according to Christ. ~ Colossians 2:8

For the time is coming when people will not endure sound teaching, but having itching ears they will accumulate for themselves teachers to suit their own passions, and will turn away from listening to the truth and wander off into myths. ~ 2 Timothy 4:3-4

While George Romero’s Night of the Living Dead is widely credited with the inauguration of the modern zombie concept, a strong case can be made for none other than God the Spirit through His perfect written Word as the original author of zombie mythos. After all, it is His hand that wrote of the true nature of fallen man in such startlingly vivid, much-better-than-Technicolor detail, that many who read it simply cannot endure prolonged exposure to the picture that it paints. They recoil and they resist. They object and they protest. Such is the horror of fallen man’s reality.

Scripture paints a picture of fallen men and women in this real world that is far bleaker than the shambling hordes of “living dead” that dot the landscapes imagined by the likes of George Romero. It’s not even close, really.

Consider for yourself the following truths concerning fallen men and women as revealed in Scripture:

Where the biblical account of zombie nature deviates from the more contemporary Romero spin on the concept is that one of the greatest longings and habits of actual zombies is for the formation and promotion of religion.

And it is here where one of the brightest, boldest, and most important battle lines is drawn.

On one side are zombies. They are completely dead spiritually, self-obsessed slaves to sin, lovers of the flesh, and haters of holiness and its Author.

On the other side are supernaturally regenerated “new creatures” in Christ. They are slaves to Christ, Gospel-fueled, lovers of the Lord and His truth. They are called and empowered to wage war against all that would stand in opposition to Him.

The one and only determining difference between the zombie and the new creature is the grace of God. This truth, when held closely, will be of great assistance as we consider the subject of zombie evangelism.

ON GRACE AND ZOMBIES

For who regards you as superior? What do you have that you did not receive? And if you did receive it, why do you boast as if you had not received it? ~ 1 Corinthians 4:7

One goal of this book is to inspire righteous anger.

The anger part of that “righteous anger” formula is all too easy to find and foment. It comes quite quickly and easily to us by nature. It’s the righteous part of the equation that’s often a profound challenge in light of that very same nature, but this is a challenge that we, as new creatures in Christ, are commanded and equipped to overcome. With that in mind, this seems like a perfect time to remind ourselves that, as even the zombies so often like to say: “There, but by the grace of God, go I.”

This is true. Totally true. Even when a zombie says it.

And this truth means that, among other things, you and I both were once flesh-loving, God-hating zombies, right up until the very moment that He chose to save us. Let that soak some, even if you already have a solid understanding of this truth.

You and I once hated God by our spiritually dead nature, and we loved sin by the same. We once sat squarely positioned under the soon-coming righteous judgment of that same holy God and were incapable of moving – or even desiring to move – off that mark by even a single solitary millimeter. We loved it there because we hated Him. We loved what He hates and hated what He loves. We were that dead, or what we call ‘round these parts: “a zombie”. I was a zombie. You were a zombie.

And it was in this putrid, sin-loving, truth-despising, God-hating state that He found and saved you, bringing you from death to life and infusing you with a new nature that inspired you to love the things you once hated and hate the things you once loved. He did this for you while you hated Him.

Only with our self-esteem properly obliterated are we able to even enter the arena of battle known as “evangelism” with any real sense of coherence and credibility – precisely because we must realize that all of the credibility is of Him and none of it is of us – even when it comes to the subject of our own supernatural conversion. Everything that we have or know – every thought, impulse, desire, hope, dream, accomplishment or bit of progress in any area of life – is all a gift from Him to us. We have no claim to personal glory here. And only in embracing this truth are we properly equipped to “wage the good warfare” and “fight the good fight” where this modern day American Churchianity-fueled zombie apocalypse is concerned.

This total, perfect grace permeates and defines the only supernatural message with the power to bring true life to the walking dead. And we are called to bring that message – and that life – to those zombies.

(Click here to continue on to Part 2: Waging War on the Church of the Living Dead.)

The Difficulty in Finding a Biblical Church