On October 31, are we walking dead or are we supernatural reformers? 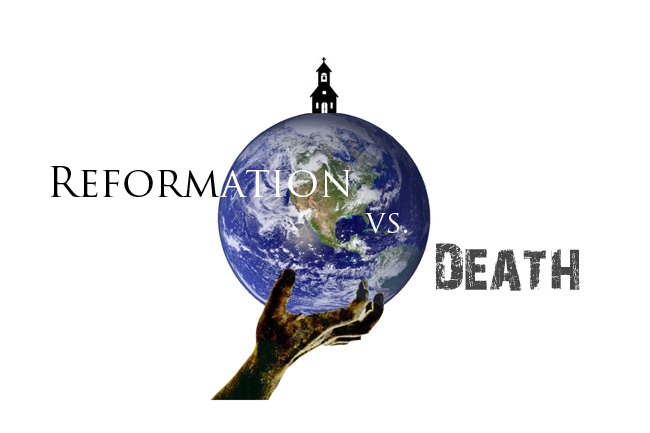 So what is today to you? Is it Halloween, Reformation Day, or just another Friday?

Most professing Christians would go with the first or the last. The middle option usually isn’t even on our radar. Most of us don’t even know that there is such a thing as Reformation Day…or that there is, in fact, right here ad now and ongoing Reformation through the Gospel-fueled Great Commission of Jesus Christ, the King of creation.

And that seems like something that Christians oughta know, doesn’t it?

Yet, here we are: Happily oblivious, playing along with the world while watching it continue to rot en route to the coming judgment. We think like the world and we live like the world because we dismiss the Gospel and Great Commission like the world.

Our happy ignorance of such fundamental facets of biblical Christianity as the Great Commission has come to be the norm here in America through generations of flight from Scripture even (and often times especially) within self-described “good, conservative, Bible-believing” churches. Through multi-generational retreat from Scripture we have been led to a place where even most “conservative” Christianity in America is just another dead, man-centered zombie religion in practice. (See: The (church built) Zombie Apocalypse is upon us…)

This seems like an appropriately horrifying truth to tackle on October 31, both because it is Halloween and, (much) more importantly, because it is Reformation Day.

What better time to take note of the zombie religion that we’ve enabled as professing Christians who have abandoned the Gospel-fueled Great Commission as the means by which we move our culture…by God’s grace, one supernatural salvation at a time?

What better time to shake off the dirt and cobwebs that have settled into place at the behest of “professionals” of all sorts (pastors included) who would guide and encourage us to seek meaningful, positive change in our lives, families, communities, and culture through anything and everything but that Gospel-fueled Great Commission?

What better time to take a look at and repent of our apathy, laziness, and neglect when it comes to proclaiming and applying that supernatural Gospel and Great Commission in every realm of creation right here and now?

As people, we have a seemingly endless capacity to indulge and justify laziness and apathy.

Professing Christians in America have honed this selfish, apathetic inclination into a black art form.

One of the more ridiculous, annoying, and damaging ways in which modern American professing Christians have been trained to spin their personal apathy, laziness, and oft open rejection of the Great Commission is by telling themselves and others that anything physical is “of the world” and therefore not worthy of much, if any, focus, effort, or sacrifice. This very Gnostic understanding of the physical world as inherently bad and the immaterial world as inherently good has come to define (and neutralize) the vast majority of professing Christians in the West.

Scripture teaches that to be “of the world” is to be of a sinful, prideful, man-centered mindset, origin, or nature. This state of being most certainly has a spiritual, immaterial foundation. This sinful spiritual condition is what the world was plunged into through the fall in Eden. Physical manifestations of this spiritual condition follow; they do not lead the way or determine anything. The reason that there is death physically is because there has first been death spiritually.

This truth applies to everything.

Human beings, which are both spiritual and physical, have been terminally corrupted through sin. So too have immaterial things – including, for example, the concept of the pursuit of knowledge in the Garden of Eden.

Where the serpent convinced Adam and Eve that knowledge could be rightly pursued apart from obedience to God at its core (see: Genesis 3), he promoted a fundamentally dead form of the pursuit of knowledge…a form embraced and cherished by most professing evangelical Christians in America today.

The same sad truth applies to the state of other vital culture- and civilization-shaping immaterial concepts like economics, philosophy, and love. Insofar as they have been disconnected from Scripture as their defining core, they have been left dead and capable of spreading only increasing darkness and death. They are immaterial, “of the world”, and very destructive.

This is the condition we have been called and empowered to change through the Gospel-fueled Great Commission…which is the very mission that has been abandoned (and often openly opposed) by most professing Christians in America.

Where the Great Commission compels obedient Christians to “make disciples” and teach those disciples “to do all that” Christ the King has commanded in every realm of life, right here and now, the typical modern American professing Christian is far more Gnostic than Christian, and, in this condition, embraces and enables a worldview that is thoroughly satanic in its apathy, laziness, and often open disdain for the Great Commission mandate.

This seems like something we ought to be thinking on, praying about, and acting upon as we are blessed with the arrival of another Reformation Day.

There are many questions that we ought to be asking…

What is true biblical Reformation?

What does the supernatural Gospel do to a person who, by the grace of God, repents and believes in response to the command to do so?

How does such a supernaturally transformed person then behave? What do they do differently?

How do they then personally apply and advance the Great Commission?

To what does that Commission apply? Why is it so “Great”?

Does it cover children’s education, economics, and politics? Is there any area of life, culture, and civilization that it does not cover?

Or does it only deal with those areas deemed to be “religious” or “churchy” in nature?

What should it look like right here and now?

Lord willing, these questions will inspire thought and action on the part of His people on this and every coming Reformation Day, so that we might actively reform and restore that which is dead in our lives, homes, communities and cultures…all by His grace and for His glory.

WHAT? Oprah starring in “The Shack?”

Lies from the Father of Lies