America’s Preferred (and Protected) Symbol of Slavery and Oppression 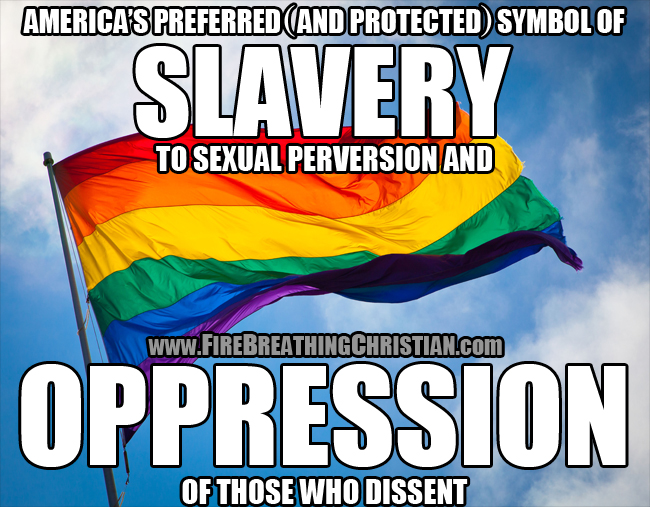 As you may have noticed, people are talking a lot about flags lately.

And slavery. And oppression. And hate and feelings and sensitivities.

And how Confederate flags and icons are uniquely worthy of a purge here in “the land of the free” and the home of the NSA.

Politicians, “experts” and “leaders” from all across the Pagan worldview spectrum are coming out swinging against these select “symbols of hatred, bondage and oppression”. Most members of Pagan Right and Pagan Left leadership sure seem to be (once again) marching in lock step on this one.

That should be curious to us.

That should be suspicious.

Before pursuing this curiosity and suspicion any further, let’s admit that there are good reasons to critique the history and associations of any flag. We need to test all things in light of Scripture, including the worldviews associated with any particular flag as well as our motives for flying, saluting, or otherwise honoring that flag. Christ-dismissing patriotism has become one of the most cherished idols and effective tools of the enemy in America, and we need to remember that any flag or symbol can be similarly corrupted. (See also: Loving America by Killing the America Idol.)

Along these lines and in the wake of recent Purge-related discussions, some great and important points have been made by some rock-solid Christians as to why we need not react in a reflexive, defensive manner against each and every critique of any perceived symbol of state’s rights, limited government and the like. My point here is not to examine, defend or critique the symbols and icons at the center of the present storm. What I hope to do here instead is remind us all of the flags, symbols and ideologies that are being aggressively and unapologetically pushed by the very same American Corporate State that has now aligned all of its tools and assets in favor of the aforementioned Purge.

Here are three points we might want to keep in mind as The Purge rolls along:

So as the manufactured hubbub and contrived, selective “outrage” over certain flags and symbols rages on, remember: The American Corporate State hates you, it hates your children, and it will do anything and everything that it must to move you ever deeper into dependence, slavery and worship of the State as god in practice.

The State and its Corporate handlers are all for slavery and oppression.

What they cannot and will not abide is even the thought of decentralization and secession as legitimate.

They will burn any flag and topple any monument necessary to prevent that from happening…all while proudly promoting and parading a rainbow flag consecrated to rebellion against God and the persecution of His people.

Muslims Force Christian To Convert To Islam, Then Brutally Behead Him