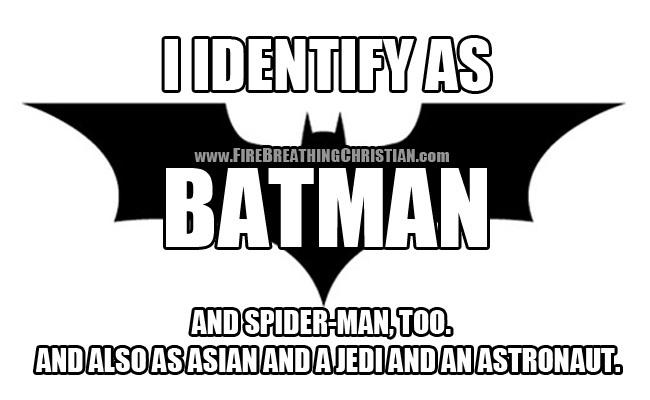 When I was three, I wanted to be Spider-man.

Whichever would be fine.

Later in life I came to realize that the Astronaut option pro’ly wasn’t gonna pan out. Even so, I remained hopeful for a radioactive spider bite, so I consoled myself with knowledge that there was always at least an outside shot of good things happening on the Spider-man front.

But in recent weeks something wonderful has come to light. An infinitely liberating revelation has come my way.

That revelation is, among other things, that I am Spider-man…and an Astronaut.

And I’m Asian like Bruce Lee and Mr. Sulu, too!

But how can this be, you may ask?

How is it possible that I am Spider-man…and an Asian Astronaut Bat-/Spider-man Jedi Jiu-Jitsu master?

Check this out: I am each and every one of these things because “I identify as” them. (See: So why can’t Dolezal be black and Jenner be a woman? Isn’t that the new American way?)

And if you have a problem with that, you’re nothing but an Asian Jedi Dark Knight Jiu-Jitsu Master hating bigot, so don’t even think about telling me any different!

I feel, therefore I am…whatever I feel like being.

If I feel like I’m Batman, I am Batman.

If I identify with being Batman, I am Batman.

See how this works?

If it feels good, be it.

Same goes for, well…pretty much everything else. (See also: Gender Chaos: The Insanity (and Impossibility) of “Sex Change”.)

Because if these things are ultimately and explicitly defined by the light of God’s Nature as revealed in His Word, then anything goes…as it is doing now here in “the land of the free” and the home of the NSA.

This is what happens when individual feelings trump objective truth of Christ as the personal defining standard for all of His creation.

More precisely – and more fundamentally – this is what happens when the emotion-driven opinions of men are exalted above the unbreakable, inescapable reality of God’s Nature as revealed in His Word.

What began for our culture as a “God-given right” to worship false gods has put us on the imaginary throne of our imaginary “reality” and we are now watching the full realization of that “man as god in practice” approach to “reality” come to fruition before our eyes. (See: Note to ‘Merica: There is no “God-given right” to worship false gods. Repent accordingly.)

Or whatever eyes you most identify with having at any given moment.

“We the people” have imagined ourselves to be “liberated” from the shackles of God’s binding reality for a very long time, and true reality – His reality – is about to hit. Hard.

Until the eyes of the people in this proud, dying culture are supernaturally transformed by the grace of God through the Gospel, enabled to see true reality, and inspired to seek Christ as the living personification of truth in all of His creation, I’m afraid we are going to see far stranger things than even “Caitlyn Jenner”.