Lines are drawn. Which side are you on?

It has been an interesting week to say the least. The co-founder of Red Letter Christians, Tony Campolo, has finally come out and publicly acknowledged what many of us suspected for a long time—his full time endorsement for LGBT inclusion and acceptance within Biblical Christianity.

And a worship leader at Bill Hybels’ Willow Creek Church has admitted he is a homosexual with full knowledge and support of Willow Creek leadership. Such are the days we live in as Christians and we are now just experiencing the tip of the iceberg.

Let’s start with Campolo. Anyone who has followed this man’s teachings and still considered him a serious Christian threw common sense out the window a long time ago. He has espoused universalist beliefs for more than twenty years and has abandoned orthodox Christian beliefs a long time ago. So Campolo’s announcement is no surprise at all. But what happens next will tell us a lot about the Christian leaders who have joined hands with him in the past. Locally, we have a Christian ministry that puts on an annual music event called Lifest. The founder and President is a member of Red Letter Christians, the organization Campolo started with Jim Wallis years ago. Will Campolo’s announcement cause this person to break fellowship with Campolo and his organization? We’ve asked him directly, but he has not answered that question. We’ll see.

Nationally, Lynne Hybels the wife and co-pastor of Willow Creek Church has partnered with Campolo for years to advance the anti-Israel cause in the Middle East. Will Campolo’s announcement cause Lynne Hybels to break fellowship with Campolo?

Lines are being drawn and God will be glorified in spite of people like Campolo. God will use this incident to show the separation between those who believe in the eternal truth of His Word—and those who look at the Bible through a lens of humanism and the flesh. The professed homosexual leader at Willow Creek is an interesting event. He claims Willow Creek is helping him reconcile his homosexual orientation with God while he leads a life of celibacy. I hear arguments on both sides of this news. Some say he should be removed from leadership in the church. Others say since he is celibate he should be allowed to remain in leadership. But here is the point: This leader is not acknowledging that homosexuality is a sin before God. He seems to be perfectly fine with being homosexual in spite of the Bible’s severe warnings against it.

And he is attending, with Willow Creeks’ permission, Matthew Vines’ event that seeks to discover how homosexuals can pressure churches into approving of homosexuality as acceptable in the Christian life.

Now before you think we are acting as homophobes or bigots, let me be clear. I would have the same problem with this if this man were an unrepentant adulterer or fornicator. Homosexuality is merely one of several sexual sins the Bible speaks out against. And unless we confess of our sexual sins—heterosexual or homosexual—we will not be forgiven by God. We all struggle with sin and sexual temptations—and sometimes we fall into sin. But until we confess our actions as sinful and ask God for His gift of repentance to turn away from our worldly lusts, we will not inherit eternal life with God. It always comes down to this: We are all sinners. But the born-again believer acknowledges and confesses his sins. The phony professing Christian seeks to justify his sins as righteous and acceptable to God.

Willow Creek Church has been dancing around the issue of homosexuality for many years trying to find a “compromising balance” between the truth of God and being an inclusive church that welcomes all people, regardless of their standing before God. Hybels continues to elevate leaders at his Leadership Summit that openly approve of homosexuality, de facto approving of their anti-biblical beliefs.

The Willow Creek Association is influencing thousands of Christian churches throughout our nation. If you are a pastor who is a member—and you love Bill Hybels—it is time to prove that love. You need to lovingly but firmly confront Pastor Hybels and ask him to clearly speak out on issues that are plaguing his church and association.

Why does he insist in elevating pagans as leaders in the eyes of Christians through his Leadership Summits? Why is he allowing an unrepentant sexual sinner to continue to lead worship at one of his churches? And why has he allowed this man to attend a conference by Matthew Vines to infiltrate the church and pressure pastors to turn their backs on the Word of God and support open, unrepentant sexual sin?

Why is he allowing his wife Lynne to partner with people like Tony Campolo and Jim Wallis—men who have firmly rejected the accuracy and authority of the Bible?

Brothers and sisters, these are interesting times indeed. I believe the Lord is beginning to separate His sheep from the goats. The issue of homosexuality and its conflict with Biblical Christianity is the defining issue of our generation. It is time for Christian leaders—true leaders—to boldly proclaim their views on the issue and go on the record once and for all. Sorry leaders, but you are Christians, not politicians. We are not called to stick a finger in the air and see which way the wind is blowing before we make a decision. We are called to boldly and lovingly stick with and proclaim the truth of God’s Word. Anything less than this and you forfeit your right to be called “leader” within the Body of Christ.

We are called as Christians to confront a brother in love when he is sinning or going down a dangerous path. And Willow Creek is flirting with fire and is at a very dangerous crossroad in their history. Peter Drucker’s influence is destroying a once excellent church and ministry, leading it down a dangerous path of compromise and apostasy. If you are a member of the Willow Creek Association, do you love the church’s leaders enough to confront them in this apparent slide toward accepting unrepentant sexual sin as righteous and pleasing to God?

It is also crucial that we who hold to the Word of God on the issue of sexual sin not allow hatred or bigotry to rule our hearts. People struggling with sexual sin or sexual identity in their own eyes are not our enemies. They are people falling for the lies of Satan and this world—lies that say we can have eternal life with God and still go on sinning like pagans. We need to be praying for these men and women, asking God to reveal His truth to them. We need to be sharing the truth of the gospel in love with them. Our hearts should break when we think of the possibility that they will perish separated from God for eternity.

“And we know that for those who love God all things work together for good, for those who are called according to His purpose.” (Romans 8:28) I praise God that He has allowed the controversies of this past week to come to light. They will force professing Christians to choose a side on the defining church issue of our generation. And all of us will have a better understanding of the heart and soul of the men we look up to as leaders. I pray that God will speak to them and help them do the right thing. 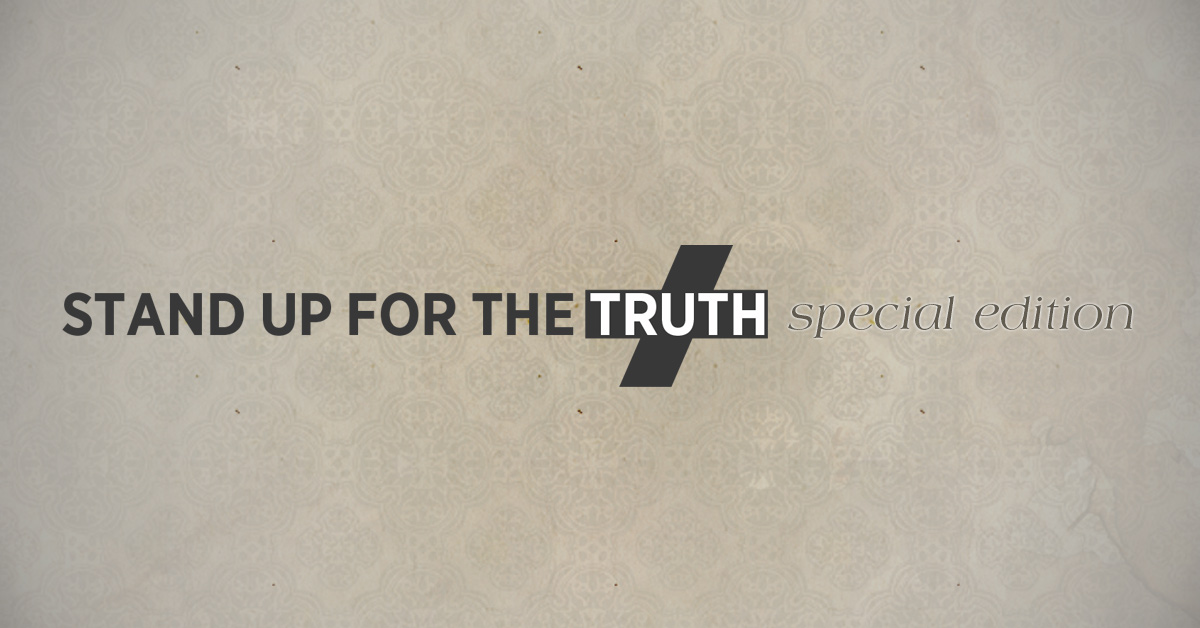 Will You Stand With Us?

“I’m a Christian” Would You Define That Please?