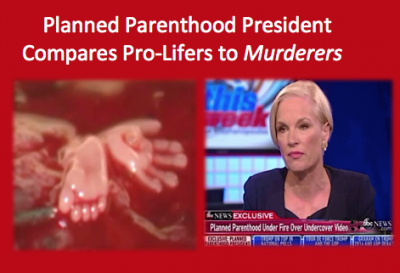 Woe to those who call evil good and good evil, who put darkness for light and light for darkness, who put bitter for sweet and sweet for bitter! – Isaiah 5:20


If you haven’t seen the interview ABC’s George Stephenopolis did with Planned Parenthood president Cecile Richards, you need to hear how she spins the bloody evidence and the smoking gun found in video after video exposing Planned Parenthood for the death mill that it is.  And yet she kept calling the people behind the “highly edited” videos and anyone else who is pro-life “militant,” comparing them to murderers.

Richards accused the Center for Medial Progress of being “part of the most militant wing of the anti-abortion movement,” while asserting the pro-life group is linked to organizations that bomb clinics and murder doctors.  Richards made the accusations during her Sunday appearance on ABC’s “This Week.

The human trafficking of baby body parts for cash is now exposing the putrid underbelly of abortion that pro-abortionists can no longer avoid seeing. There is now a third, full-length documentary ( see, Third Planned Parenthood Expose Most Shocking Yet), released by The Center for Medical Progress, featuring actual footage of technicians sifting through a pie plate of legs, livers, spines and other parts, and talking about how much each piece of flesh could net them on the black market.

The video also features an interview with Holly O’Donnell, who fainted in shock on her first day of work in a Planned Parenthood clinic when suddenly asked to dissect a freshly-aborted fetus during her on-the-job training. O’Donnell, a licensed phlebotomist, unsuspectingly took a job as a “procurement technician” at the fetal tissue company and biotech start-up StemExpress. Her job was to identify pregnant women at Planned Parenthood who met criteria for fetal tissue orders and to harvest the fetal body parts after their abortions.

Four children beheaded by ISIS for not denying Christ