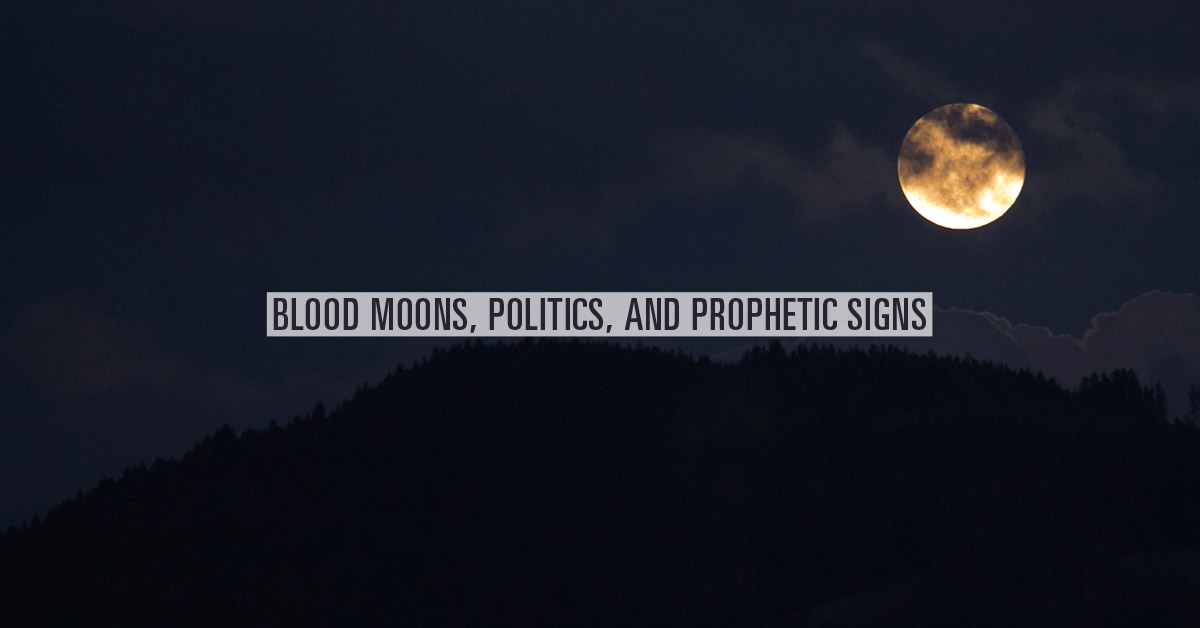 There are several voices out there warning us of all sort of things.  People are talking about Blood Moons, Shemitahs, an economic collapse, as well as the Pope meeting with President Obama, gay clergy, and transgenders.  Many see these as signs that the return of the Lord is near, but none of us know the hour or day so we are to be about God’s work as long as we are here. Christians must live in this world without being sucked in to its evil ways.

Today on Stand Up for the Truth, we kicked things off with a thought-provoking discussion about Joel Osteen’s new book, The Power of I AM, which some are calling blasphemy.

Next up – back in 2008, a Washington Pastor, Mark Biltz, began to teach that the Second Coming of the Messiah might occur in the Fall of 2015. The basis of his theory — and not his conclusion — has now been given legitimacy by the publication of Pastor John Hagee’s book, Four Blood Moons. To his credit, Hagee does not set a date for the Lord’s return in his book. Instead, he simply takes Biltz’s discovery and argues that it is an omen of a major development that will take place — a development that will most likely have a significant impact on the Jewish people.
.
David Reagan of Lamb and Lion Ministries writes there is no way the Second Coming could occur in the Fall of 2015 because there are too many prophecies that must be fulfilled before the Lord’s return. To name a few:
.
The Rapture of the Church must occur.
.

Jan Markel of Olive Tree Ministries weighed in with some balanced advice: be watchful, not worried. She cites the example of supposed prophets predicting the Rapture. Markel tells OneNewsNow:

Blood Moons were present in 1967, during the Six Day War when Israel was attacked by Egypt, Jordan and Syria. But just as with the recently completed Shemitah cycle, Christians need to pay attention but don’t go off the deep end. I think when you hear people talk like that you need to dismiss them as sensationalists and they’re not trustworthy.

On today’s broadcast, we referenced  Acts 2:16-21 NASB when the Apostle Peter quoted the prophet Joel and preached by the power of the Holy Spirit on the Day of Pentecost. Everyone who calls on the name of Jesus will be saved!

Also, in response to the buzz about what the shemitah means for Israel and America, Rabbi Tuly Weisz states:

Shemitah means the sabbatical. There’s a year of rest for the land of Israel and for people all over the world. People who’ve never heard of shemitah are all of a sudden looking and trying to explore what is the significance of shemitah because of all the global events that are happening that seem a bit unusual.

Author and Rabbi, Jonathan Cahn warned of a shaky global economy and trouble coming to America, and on the 700 Club this week declared, “a great shaking is coming to America and the world.” This may be true and yet, how this will unfold is known only to the Lord so it is necessary to remember these signs are for people to turn to Him before it is too late! We also need to remember we belong to the only unshakable Kingdom, and our God is a consuming fire. See Hebrews 12:25-29 NASB

Due to the Republican Debate a few days ago, we also turned to politics. America has more than a dozen men or women telling us ‘If you just elect me President, everything will change for the better!’ The most conservative candidates however, don’t seem to be getting much air time. In addition, some – like Donald Trump – profess to be Christian but their words and actions don’t exactly back up their talk. This includes President Obama’s claim to be a Christian which we also discussed.

Franklin Graham, for one example, has stated on many occasions that just because a politician says they are Christian doesn’t mean it is true. Watch what they do. You’ve got to look at the fruit of a person’s life, which of course also applies to you and me. Hope is not an accident!

At BYU, Baptist says Mormons and evangelicals "may go to jail together"