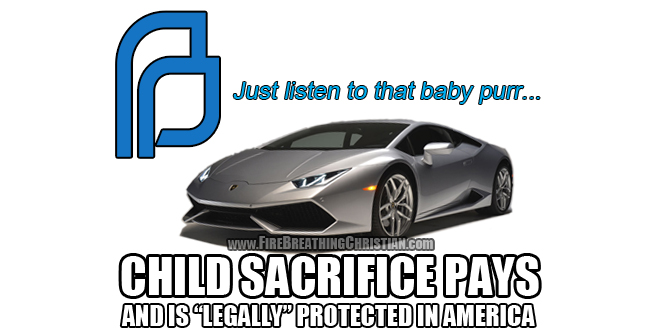 “Everything we provide is fresh.”
That line from a Planned Parenthood ghoul is one of the satanic jems permeating the latest expose video released this week by the Center for Medical Progress.
And lest there be any confusion here, we’re talking about “fresh” baby body parts taken from babies who’ve been freshly murdered so that these fresh bits o’ baby might be sold for as much as the baby body part market in America “legally” allows at present…which is quite a lot…especially in bulk and when you’re operating on the scale of a Planned Parenthood type business.
You can buy a lot of Lamborghinis with what Planned Parenthood “legally” takes in here in “the land of the free” and the home of the self-described “brave”.
And Lamborghinis make a good reference point here because, in videos released earlier in the series, we heard straight from the horse’s whatever of a Planned Parenthood stooge that she wanted to sell baby body parts because she “wants a Lamborghini”.
So here we are, in an America where organizations like Planned Parenthood can go on and on year after year and decade after decade openly murdering babies for money under the full “legal protection” of the United States of America. (See: Selling murdered baby parts in America? Sure. Why not?)

All while we’re led by the nose off to war here, there, and  everywhere imaginable overseas to stop the horrors of ISIS, of course. (See: If ISIS did to one American child what Planned Parenthood does to millions, we’d go to war and kill them for it.)
All while the Republican Party continues to feed on these children and this “legal” industry so that it can fill campaign coffers and ballot boxes with the money and votes of perpetually duped “Pro-Life Christians”. (See: Just in case you still think Republicans are ever going to actually stop abortion…)
And all while “conservative Christians” hold massive rallies to support the supposedly “God-given ‘right'” of Muslims and Satanists to openly worship Allah and Satan in America. (See: Christians rally for the “rights” of Satanists to worship Satan in America.)
These days it seems like almost everyone in America is benefitting from child sacrifice in one way or another.
And we dare to wonder why the wrath of God is upon us…in the form of “legally protected” Satanism and child sacrifice. (See: Presuppositional Law: Where we begin with law determines where we end.)
~
If you’d like to read more along these lines, please head on over to the Fire Breathing Christian site, where everything from theology and education to movies and pop-culture is tackled head on from a Christ-centered and Gospel-fueled perspective.
Thank you for your time. interest, and support!
Soli Deo Gloria,
SAB