The Literal Dumbing Down of Public Education 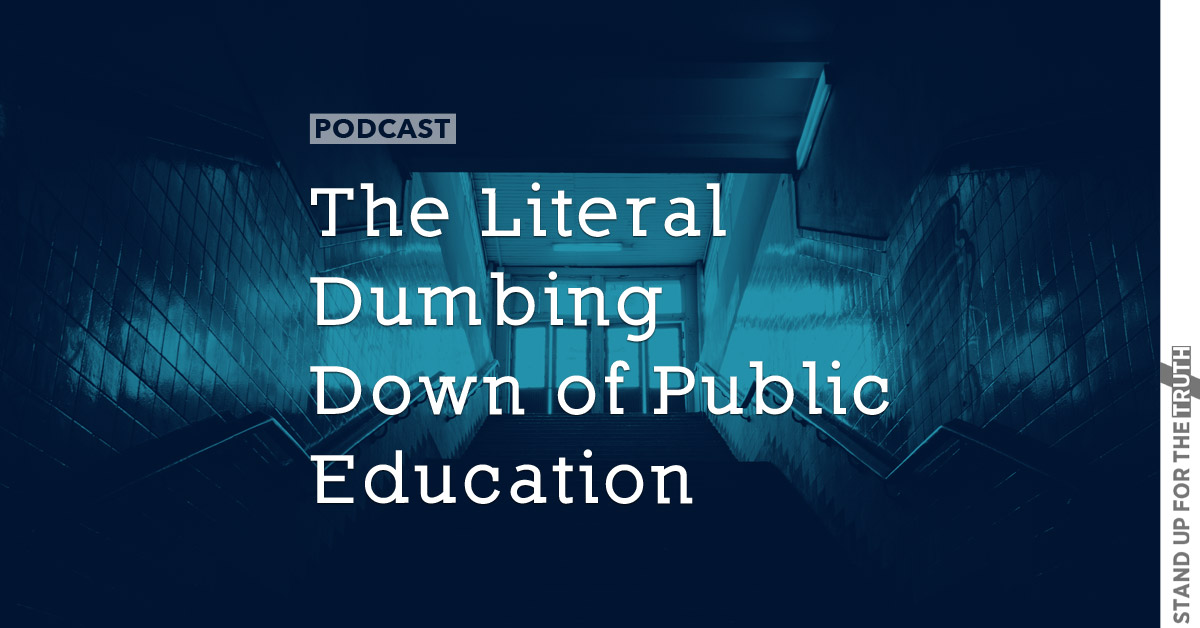 In 1964, President Lyndon Johnson introduced his “Great Society, ” big-government programs aimed at eradicating poverty in the United States.  The centerpiece of the bureaucracy was a massive influx of government spending on public education Johnson said would prepare America for the future.

Fifty years later, we are reaping the effects of the expansion of government control in public education.  Evolution has replaced biblical creationism; Islam has become the darling “religion” in our public schools, truth about socialism has been whitewashed, and homosexuality has been completely normalized.

During the interview today, Mike LeMay explained how the NEA takes their marching orders from UNESCO and promote global humanism. They believe the problem is Christianity and the “antiquated religion” of most traditional Americans, and the UN believes in teaching sex education for girls as young as six years old.

Money sure isn’t the answer. In recent years, despite the increased federal funding in “education,” America has plummeted to the bottom of the world rankings in how effectively and efficiently our youth are prepared for the realities of adult life.

Dr. Duke Pesta of Freedom Project Academy joins us this morning to discuss the latest [anti-Christian] government “fix” for our education woes:  Common Core.  We’ll also look at the expanding influenced of Islam and the homosexual/transgender movement in public education.

Just now hearing about this? What is Common Core?

The Common Core Standards came about when Bill and Melinda Gates first began funding their vision for national educational standards with a grant to the James B. Hunt Institute. To date, the contribution of the Gateses to this project is estimated at 27 million dollars and counting. This seed money led to the development of the Common Core Standards State Initiative by the National Governors Association (NGA) and the Council of Chief State School Officers (NCSSO), two Washington, D.C. based trade organizations, working in conjunction with Achieve, Incorporated, a D.C. based contractor, and the James B. Hunt Institute, a private lobbying group. Despite the participation of the NGA and NCSSO, the Common Core standards are NOT state-led initiatives, as proponents of Common Core would have you believe.

Why should Americans be concerned about these standards?

It would take many pages to lay out all of the dangers to our liberty and educational freedoms contained in the Common Core State Standards Initiative. In brief, each of the fifty states has been bribed by the Federal Government to accept the copyrighted and thus unalterable Common Core standards—even though most Americans have no idea what they entail—by offering those states millions in so-called “Race to the Top” money or exemptions from the failed No Child Left Behind program. To date, forty-six states have accepted Common Core money, ceding curricular control to the Federal government and taking it away from parents, teachers, and local school boards. Beyond the educational mediocrity that Common Core standards will further enshrine in public schools, there are elaborate plans to use the required national assessments within the Common Core Standards as a tool to institute massive data collection about American school children that has nothing to do with education, and everything to do about Government intrusion and control.

A “Common Core” for a Global Community

The Truth about Common Core

Headlines; the Insanity of a Confused Culture

The Church, Public Schools, and the Hebrew Scriptures

Why stand with Israel? An interview with David Hocking