The Coming Collapse of Culture and Economy 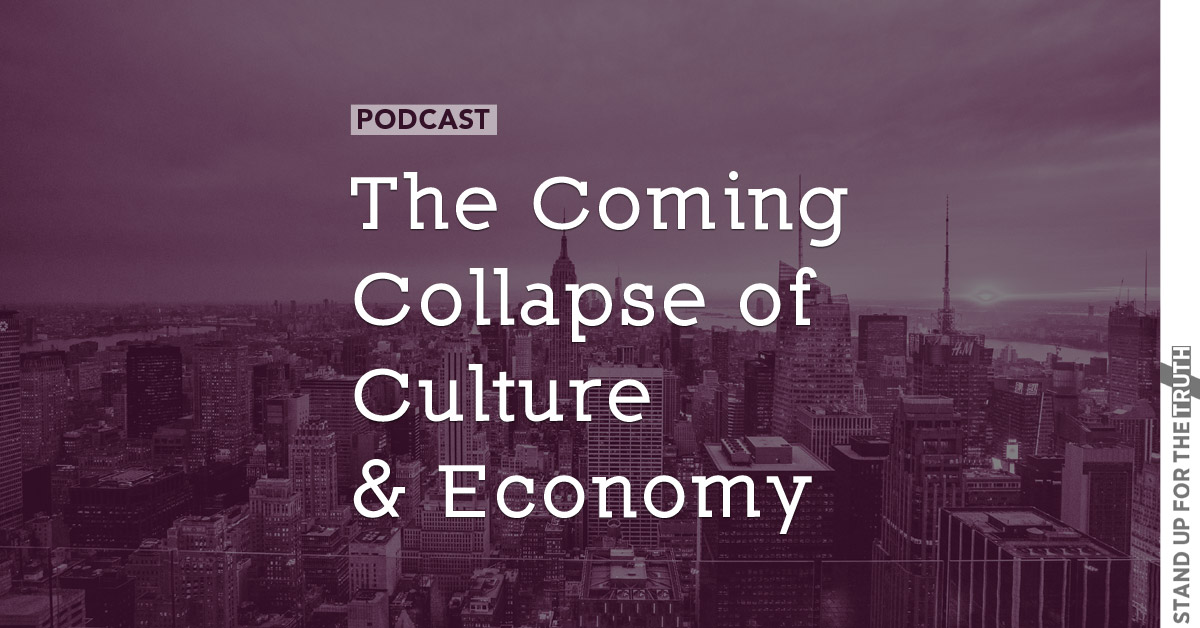 This week we are discussing the need for the Christian Church in America to wake up and realize its very existence is being threatened by secular humanism as well as a government, media and education system bent on imposing its “values” on Christian citizens.  Do our church leaders have the wisdom and courage to see what is happening and stand strong or will the desire for popularity and increasing numbers trump the truth?

We are also joined this morning by Doug Wakefield as we look at the boiling economic crisis the world will be facing in the next few years.  It is not a matter of if, but when.

Now as to the times and the epochs, brethren, you have no need of anything to be written to you. 2 For you yourselves know full well that the day of the Lord will come just like a thief in the night. 3 While they are saying, “Peace and safety!” then destruction will come upon them suddenly like labor pains upon a woman with child, and they will not escape. 4 But you, brethren, are not in darkness, that the day would overtake you like a thief; 5 for you are all sons of light and sons of day. We are not of night nor of darkness; 6 so then let us not sleep as others do, but let us be alert and sober. 7 For those who sleep do their sleeping at night, and those who get drunk get drunk at night. 8 But since we are of the day, let us be sober, having put on the breastplate of faith and love, and as a helmet, the hope of salvation. 9 For God has not destined us for wrath, but for obtaining salvation through our Lord Jesus Christ, 10 who died for us, so that whether we are awake or asleep, we will live together with Him. 11 Therefore encourage one another and build up one another, just as you also are doing. 1 Thessalonians 5:1-11

7 Sure Signs America has Declared War on Our Faith

From the article by Dr. Michael Brown:

Is there an increasing hostility to Christian values and religious freedoms in our country today? Here are seven representative examples, all from the last few weeks. Judge for yourself.

1. The NCAA announced that it will not hold any men’s and women’s Final Four basketball events in a city that “discriminates” against anyone based on sexual orientation or gender identity.

2. The Colorado Supreme Court has chosen not to hear the case of Christian baker Jack Phillips who was previously ordered by the Colorado Civil Rights Commission “to create cakes for same-sex celebrations, re-educate his staff, and file quarterly ‘compliance’ reports for two years.”

3. Dr. Eric Walsh, the highly qualified, newly hired District Health Director with the Georgia Department of Public Health was fired because of the content of his sermons as a Seventh Day Adventist.

4. Several senators have introduced a bill that would deem “all efforts to change someone’s sexual orientation or gender identity an ‘unfair or deceptive act or practice’ under the Federal Trade Commission Act.”

5. The NBA announced that it will not hold next year’s All-Star game in Charlotte, North Carolina unless the state changes HB2, the Bathroom Privacy Act.

6. The Department of Education has decided, “Religious schools that receive federal money yet obtain federal exemptions to [allegedly!] discriminate against LGBT students and employees will have their waivers posted online for public view.”

7. As reported on Breitbart News, “A federal court sided with a transgender student who insisted that the Obama administration’s reading of federal Title IX rules would allow her to choose her own bathroom at her Virginia high school.”

Is this a test?