Are Truth and Morality Things of the Past? 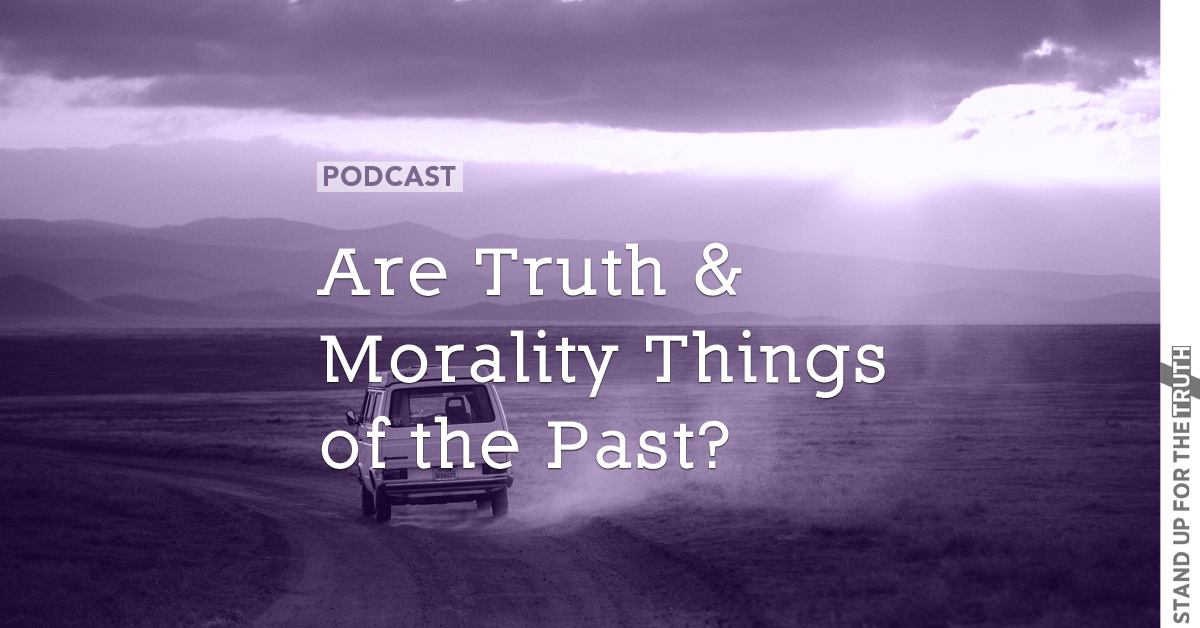 In His Word, God gives us eternal truth and standards of morality that apply to every circumstance we encounter in this life.  But increasingly, God’s truth and moral standards run up against the desires of our flesh and our prideful thoughts, thinking we know better than God what is right and true.

We talk a lot about Humanism, and rightly so, because today we discuss a brand new Barna Study showing just how confused Americans are about truth and morality. The most disturbing of these findings are the increase of moral relativism within the church.

From the new study:

Christian morality is being ushered out of American social structures and off the cultural main stage, leaving a vacuum in its place—and the broader culture is attempting to fill the void. New research from Barna reveals growing concern about the moral condition of the nation, even as many American adults admit they are uncertain about how to determine right from wrong. So what do Americans believe? Is truth relative or absolute? And do Christians see truth and morality in radically different ways from the broader public, or are they equally influenced by the growing tide of secularism and religious skepticism?

According to a majority of American adults (57%), knowing what is right or wrong is a matter of personal experience. This view is much more prevalent among younger generations…

The proportions of practicing Christians who disagree (59%) and agree (41%) that the only truth one can know is whatever is right for one’s own life are the inverse of the general population (44% disagree, 57% agree).

Even though secular humanism is said to be the “religion” spreading throughout the United States — via the curricula that many say has indoctrinated students in public schools and universities to reject their faith and adopt an atheistic worldview — statistics show that up to 80 percent of Americans still consider themselves to be Christians or adherents to other world religions.

Even though Christianity still continues to be the world largest religion, with approximately 2 billion of the earth’s 7-plus-billion people claiming to identify as Christians — at least by name — it is argued that within a few decades, this will no longer be the case.

By 2050, it is predicted that Islam will surpass Christianity as the most followed religion on the planet, as the Muslim influence on the continents of Asia and Africa have rapidly spread over the years, while faith in Allah has also become pronounced in Europe and North America in recent years, largely due to immigration and recruitment.

He who rejects Me and does not receive My sayings, has one who judges him; the word I spoke is what will judge him at the last day. John 12:48

The sum of Your word is truth, And every one of Your righteous ordinances is everlasting.  Psalm 119:160

Before the mountains were born, Or You gave birth to the earth and the world, Even from everlasting to everlasting, You are God. Psalm 90:2

“The heart is more deceitful than all else
And is desperately sick;
Who can understand it?
10 “I, the Lord, search the heart,
I test the mind,
Even to give to each man according to his ways,
According to the results of his deeds. Jeremiah 17:9-10

Even though the Bible is black and white in regards to laying out the moral path for man to take, it is argued that those who proclaim themselves to be Christians in the U.S. are as lost — when it comes to morality — as those outside the Church.

Americans are both concerned about the nation’s moral condition and confused about morality itself. As nominally Christian moral norms are discarded what, if anything, is taking their place? Barna’s research reveals the degree to which Americans pledge allegiance to the “morality of self-fulfillment,” a new moral code that, as David Kinnaman, President of Barna argues, has all but replaced Christianity as the culture’s moral norm.

Why Truth Matters: Your Worldview Affects Everything

Are Moral Truths a Product of Culture?

True to His Word

How SCOTUS Works, & the Significance of Standing With Israel