Debating the Rapture in the Scriptures 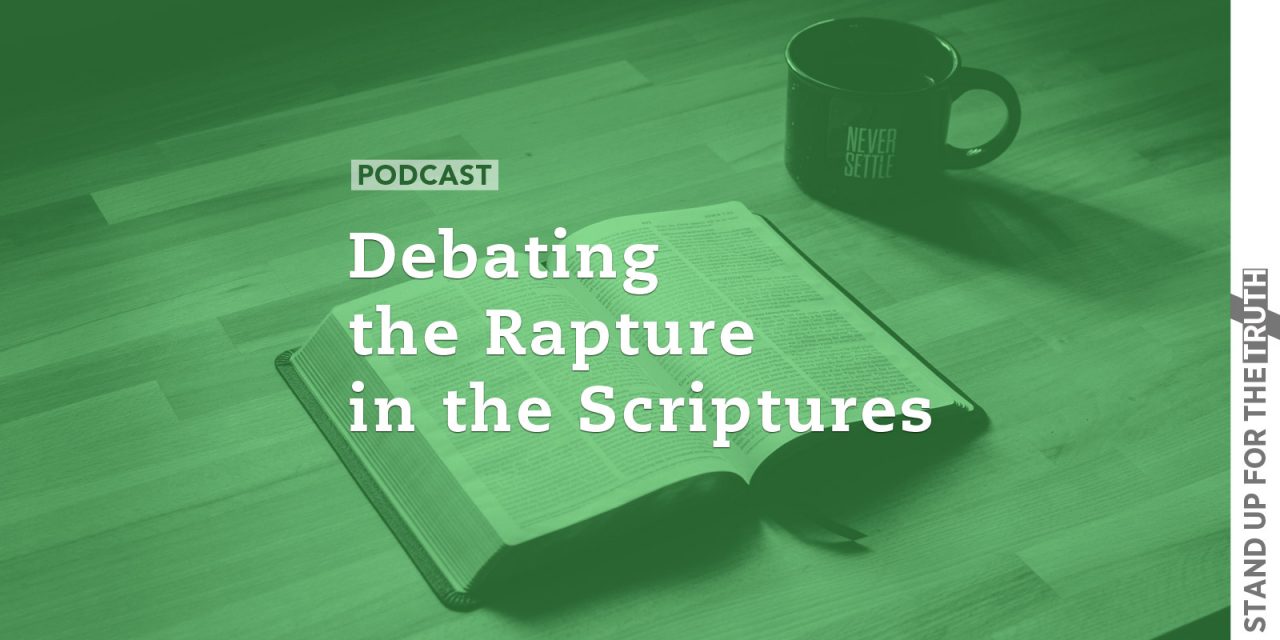 One of the hottest debate topics among biblical scholars and students is over what is referred to as the rapture of the church in the final days of this world.  A few Christians actually believe the rapture is a human imagination not even mentioned in the Bible, but most Christians believe the church will be raptured; some just disagree over the timing of it.

It certainly does appear that we might be drawing closer to the final days as we see a world in economic, social and military chaos.  And Jesus warned us to be looking for the signs of the season pointing to His return.  So how does the rapture of the true church fit into the final days before the Lord’s return?

Joining us is Dr. Andy Woods, a biblical scholar who has studied prophecy at length and written The Coming Middle East Meltdown detailing things to look for as we anticipate the return of our Lord and Savior. We also discuss Kingdom Now theology as well as Replacement theology as well as the importance of Israel as the Day of the Lord draws near. Sheba and Dedan and the merchants of Tarshish with all its villages will say to you, ‘Have you come to capture spoil? Have you assembled your company to seize plunder, to carry away silver and gold, to take away cattle and goods, to capture great spoil?’” 14 “Therefore prophesy, son of man, and say to Gog, ‘Thus says the Lord God, “On that day when My people Israel are living securely, will you not know it? 15 You will come from your place out of the remote parts of the north, you and many peoples with you, all of them riding on horses, a great assembly and a mighty army; 16 and you will come up against My people Israel like a cloud to cover the land. It shall come about in the last days that I will bring you against My land, so that the nations may know Me when I am sanctified through you before their eyes, O Gog.” Ezekiel 38:13-16


But we do not want you to be uninformed, brethren, about those who are asleep, so that you will not grieve as do the rest who have no hope. 14 For if we believe that Jesus died and rose again, even so God will bring with Him those who have fallen asleep in Jesus. 15 For this we say to you by the word of the Lord, that we who are alive and remain until the coming of the Lord, will not precede those who have fallen asleep. 16 For the Lord Himself will descend from heaven with a shout, with the voice of the archangel and with the trumpet of God, and the dead in Christ will rise first. 17 Then we who are alive and remain will be caught up together with them in the clouds to meet the Lord in the air, and so we shall always be with the Lord. 18 Therefore comfort one another with these words. 1 Thessalonians 4:13-18

And he will make a firm covenant with the many for one week, but in the middle of the week he will put a stop to sacrifice and grain offering; and on the wing of abominations will come one who makes desolate, even until a complete destruction, one that is decreed, is poured out on the one who makes desolate.” Daniel 9:27

But concerning the times and the seasons, brethren, you have no need that I should write to you. 2 For you yourselves know perfectly that the day of the Lord so comes as a thief in the night. 3 For when they say, “Peace and safety!” then sudden destruction comes upon them, as labor pains upon a pregnant woman. And they shall not escape. 1 Thessalonians 5:1-3

For if you were cut out of the olive tree which is wild by nature, and were grafted contrary to nature into a cultivated olive tree, how much more will these, who are natural branches, be grafted into their own olive tree? 25 For I do not desire, brethren, that you should be ignorant of this mystery, lest you should be wise in your own opinion, that blindness in part has happened to Israel until the fullness of the Gentiles has come in. 26 And so all Israel will be saved, as it is written:


“The Deliverer will come out of Zion,
And He will turn away ungodliness from Jacob;
27 For this is My covenant with them,
When I take away their sins.”  Romans 11:24-27


Let no one in any way deceive you, for it will not come unless the apostasy comes first, and the man of lawlessness is revealed, the son of destruction, 4 who opposes and exalts himself above every so-called god or object of worship, so that he takes his seat in the temple of God, displaying himself as being God. 5 Do you not remember that while I was still with you, I was telling you these things? 6 And you know what restrains him now, so that in his time he will be revealed. 7 For the mystery of lawlessness is already at work; only he who now restrains will do so until he is taken out of the way. 8 Then that lawless one will be revealed whom the Lord will slay with the breath of His mouth and bring to an end by the appearance of His coming; 9 that is, the one whose coming is in accord with the activity of Satan, with all power and signs and false wonders, 10 and with all the deception of wickedness for those who perish, because they did not receive the love of the truth so as to be saved. 11 For this reason God will send upon them a deluding influence so that they will believe what is false, 12 in order that they all may be judged who did not believe the truth, but took pleasure in wickedness. 13 But we should always give thanks to God for you, brethren beloved by the Lord, because God has chosen you from the beginning for salvation through sanctification by the Spirit and faith in the truth. 2 Thessalonians 2:3-13

Pride before the fall