The ‘Resistance’ Inciting Violence, Looking the Other Way 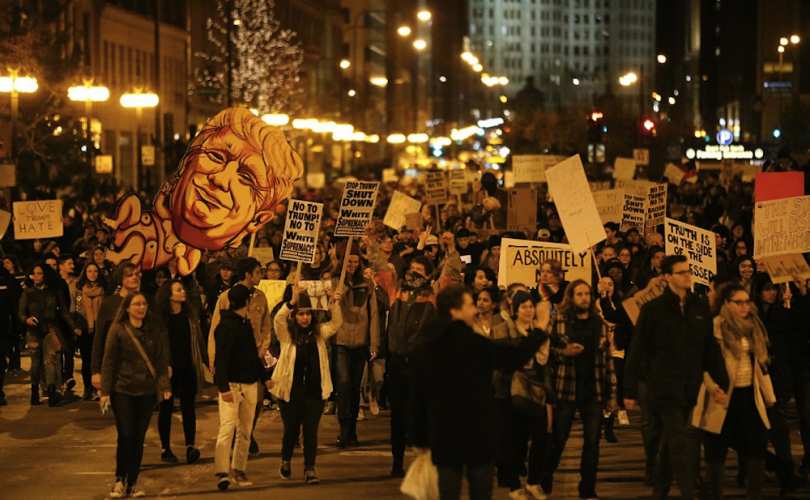 America is in critical condition. Even casual observers can see a pattern of increasing hateful rhetoric toward conservatives, Republicans, and Christians in America. The media, outspoken Hollywood liberals, and leading Democrats have been stoking the flames of vulgarity for years now, and those who are not inciting the words and actions of the left sure aren’t speaking out against them.

News broke of an attack today against Republicans as a man who had volunteered for Bernie Sander’s presidential campaign shot and wounded Rep. Steve Scalise and four others in Alexandria, VA. Most-likely feeding off the poison in public rhetoric, Democrat James Hodgkinson, an anti-Trump activist was shot dead by Capitol Hill police as GOP members were practicing for an annual charity baseball game.

One congressman stated, “By the grace of God, one of the folks here had a weapon to fire back.” With many of the men trapped in a dugout, they would have been sitting ducks had the gunman made his way around from where he initially opened fire. Credit the heroic officers who exchanged fire with the gunman and were themselves injured.

This just a week after struggling comedienne, Kathy Griffin held up a severed head of President Donald Trump, days after a New York City Public Theater production of Shakespeare in the Park stabs a ‘Trump’ lookalike (Caesar) to death in a performance of ‘Julius Caesar,’ and days after Senator Bernie Sanders, in anger, suggested Christians that believe the Bible should not work for public office.

This just months after Madonna shouted to Women’s March feminists that since Trump was elected, “I have thought an awful lot about blowing up the White House…” There are actors speaking out, vile comedy ignored, and increased hateful rhetoric from the left on social media. College campuses are proven hotbeds of one-way progressive thought, intolerance, and discrimination against conservatives and others who disagree with them. The media campaign has been constant against Trump and Republicans.

Newt Gingrich responded to the shooting by calling it a tragedy attributed to “an increasing intensity of hostility on the left.” He said he talks to college students regularly who insist if they speak up for Trump, they get threatened, some even receive death threats. This is the America the divisive Obama administration cultivated on purpose.

“It’s part of a pattern,” Gingrich stated, “The intensity on the left is very real…” He mentioned the ‘Trump assassination play’ funded by Time Warner taxpayers, and that leading Democrats have resorted to vulgarity because they are so angry. I agree with him that the intensity has been building since election night.

It didn’t take long for haters to fill social media with typical reactions about how Scalise and Republicans deserve it, cheering the violence just like they did with Black Lives Matter. Iowa Rep. Steve King said, “many of us have been subjected to threats of violence” because people “can’t accept the results of the election.”

One Republican office received a threatening email with the subject line, “One down, 216 to go” indicating support for violence against the rest of the Republican representatives.

The message in the email was Republican’s “souls and morality have been lost” because the GOP opposes Obamacare, as do millions of Americans due to the cost and the healthcare mess it has caused insurance providers, hospitals, and doctors. The person said ‘good riddance’ and asked, “Did you NOT expect this?”

…The average citizen has grown weary of the fight, but we must not ignore it.

Can we have a civilized debate over politics, including gun laws, without the media and other radicals stoking the fire? I miss the old days when disagreement and political opposition did not mean you hated the other person or party. This is now a time of sustained hostility most of us believe will not get much better in a nation that has embraced moral relativism and abandoned God.

The only thing that will alter the course we’re on is if people turn back to God because only He can change the hate-filled, hardened hearts of sinners. This is why sharing the gospel is so important. All around us, people are without hope and hurting, and incident’s like today’s is a glaring reminder of how bad it has gotten.

Abraham Lincoln was right when he called for national fasting, prayer, and repentance because the people had forgotten God. That was 1863. Healing won’t come from Washington or Hollywood; it has to start with us.

As we approach the Fourth of July and celebrate our national independence, remember our blessings and freedoms, yes, but let’s acknowledge the fact America desperately needs revival. In all the chaos and noise, people are more in need of the healing touch and salvation of Jesus Christ than ever in our history.

The Best of 2020! Pastors & Patriots on Stand Up for the Truth

Elections, Nations Change; God Does Not

Is America Beyond Redemption?

A Better Way to Educate and Equip Youth