Confronting the Lies and Propaganda of the Transgender Movement 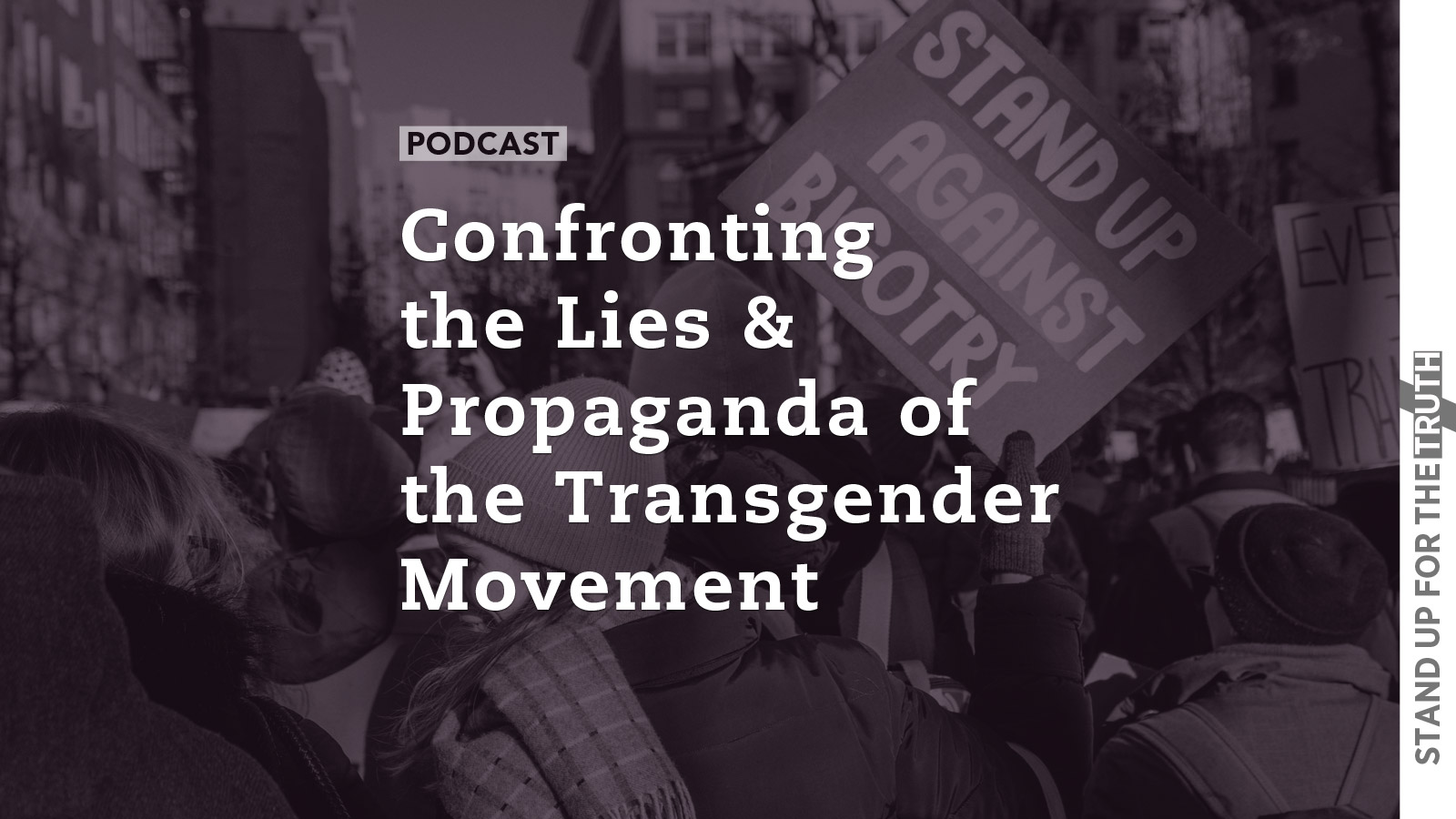 Most of us understand there is nothing new under the sun and the Bible addresses every issue of life and morality. Though this may seem like a more recent shift, America and many Christian Churches are have been gradually seduced by lies and deception regarding the transgender movement in our nation.  As city and state governments rush to pass legislation pandering to political correctness in the name of non-discrimination, fairness, love, and equality, it seems few are bothering to analyze and closely evaluate the biological, medical, and scientific facts in this debate, much less the biblical truth about creation and humanity.

Our lack of knowledge, along with our desire to conform and be politically correct is putting thousands of children at risk for a life of misery and confusion, along with elevated health risks as well as suicide attempts.

This morning we take an in-depth look at a statement on transgenderism from the American College of Pediatricians that addresses and confronts the lies and deceptions of Hollywood, the media, the LGBTQ community and its sympathizers.

We will also share some of the chilling effects of this legislation as it has been implemented around our nation.

The American College of Pediatricians urges health professionals, educators and legislators to reject all policies that condition children to accept a life of chemical and surgical impersonation of the opposite sex as normal and healthful. Facts – not ideology – determine reality. All references are found within the text of the full statement.

1. Gender dysphoria (GD) of childhood describes a psychological condition in which children experience a marked incongruence between their experienced gender and the gender associated with their biological sex. They often state that they are the opposite sex. Prevalence rates among children are estimated to be less than 1%.

3. When GD occurs in the pre-pubertal child, it resolves in 80-95 percent of patients by late adolescence after they naturally pass through puberty. This is consistent with studies of identical twins that prove no one is born hard-wired to develop GD.

4. All complex behaviors are due to a combination of nature (biology), nurture (environmental factors) and free will choices. Studies of identical twins prove that GD is predominately influenced by non-shared post-natal events. The largest study of twin transsexual adults found that only 20 percent of identical twins were both trans-identified. Since identical twins contain 100 percent of the same DNA from conception, and develop in exactly the same prenatal environment where they are exposed to the same prenatal hormones, if genes and/or prenatal hormones contributed significantly to transgenderism, the concordance rates would be close to 100 percent. Instead, 80 percent of identical twin pairs were discordant for transgenderism. This means that at least 80 percent of what contributes to transgenderism in one adult co-twin consists of one or more non-shared post-natal experiences.

5. There is no single family dynamic, social situation, adverse event, or combination thereof that has been found to destine any child to develop GD. This fact, together with twin studies, suggests that there are many paths that may lead to GD in certain vulnerable children. Clinical case studies suggest that social reinforcement, parental psychopathology, family dynamics, and social contagion facilitated by mainstream and social media, all contribute to the development and/or persistence of GD in some vulnerable children. There may be other as yet unrecognized contributing factors as well.

6. There is a suppressed debate among physicians, therapists, and academics regarding the recent trend to quickly affirm gender dysphoric youth as transgender. Many health professionals are deeply concerned because affirming youth as transgender sends them down the path of medical transition (a sex change) which requires the use of toxic hormones and unnecessary surgeries. Healthcare professionals opposed to affirming a child’s gender dysphoria based upon the medical ethics principle of “First do no harm” are being silenced. This is true among left-leaning youth trans critical professionals as well as those who are traditionally more conservative.

7. Human sexuality is an objective biological binary trait: “XY” and “XX” are genetic markers of sex, male and female respectively – not genetic markers of a disorder. The norm for human design is to be conceived either male or female. Human sexuality is binary by design with the obvious purpose being the reproduction and flourishing of our species. This principle is self-evident. The exceedingly rare disorders of sex development (DSDs), including but not limited to androgen insensitivity syndrome and congenital adrenal hyperplasia, are all medically identifiable deviations from the sexual binary norm, and are rightly recognized as disorders of human design. Individuals with DSDs do not constitute a third sex.

8. Human beings are born with a biological sex. Gender (an awareness and sense of oneself as male or female) is a psychological concept; not an objective biological entity. No one is born with an awareness of being male or female; this awareness develops over time and, like other aspects of one’s self-awareness, may be derailed by a child’s subjective perceptions, relationships, and adverse experiences from infancy forward. People who identify as “feeling like the opposite sex” or “somewhere in between” do not comprise a third sex. They remain biological men or biological women.

9. A person’s belief that one is something one is not is, at best, a sign of confused thinking; at worst it is a delusion.

11. Puberty is not a disorder and therefore should not be arrested as though it is a disease. Puberty-blocking hormones induce a state of disease – the absence of puberty. Puberty blocking hormones (gonadotropin releasing hormone agonists or GnRH agonists) arrest bone growth, decrease bone density, prevent the sex-steroid dependent organization and maturation of the adolescent brain, and inhibit fertility by preventing the development of gonadal tissue and mature gametes for the duration of treatment.

13. At least one prospective study demonstrates that all pre-pubertal children placed on puberty blocking drugs eventually choose to begin sex reassignment with cross-sex hormones. This suggests that impersonation of the opposite sex and pubertal suppression, far from being fully reversible and harmless as proponents claim, sets into motion a single inevitable outcome (transgender identification) that requires lifelong use of toxic cross-sex hormones, resulting in infertility and other serious health risks.

14. Adolescent girls with GD who have taken testosterone daily for one year may obtain a double mastectomy as young as age sixteen. This is not a reversible procedure.

15. A thirty year follow up study found rates of suicide are nearly twenty times greater among adults who undergo sex reassignment in Sweden which is among the most LGBTQ – affirming countries. This demonstrates that while sex-reassignment eases some of the gender dysphoria in adulthood, it does not result in levels of health on par with that of the general population. It also suggests that the mental health disparities are not primarily due to social prejudice, but to whatever pathology has precipitated the transgender feelings in the first place and/or the transgender lifestyle itself.

16. Conditioning children to believe the absurdity that they or anyone could be “born into the wrong body,” and that a lifetime of chemical and surgical impersonation of the opposite sex is normal and healthful is child abuse. Affirming gender dysphoria via public education and legal policies will confuse children and parents, leading more children to present to “gender clinics” where they will be given puberty-blocking drugs. This, in turn, virtually ensures that they will “choose” a lifetime of sterility, toxic cross-sex hormones, and likely consider unnecessary surgical mutilation of their healthy body parts as young adults.

17. There is a serious ethical problem with allowing irreversible, life-changing procedures to be performed on minors who are too young to give valid consent themselves. Children and adolescents do not have the cognitive maturity or experiential capacity to understand the magnitude of such decisions. Ethics alone demands an end to the use of pubertal suppression, cross-sex hormones, and sex reassignment surgeries in children and adolescents.

CMDA affirms the historic and enduring Christian understanding of humankind as having been created male and female. CMDA has concerns about recent usage of the term “gender” to emphasize an identity other than one’s biological sex, that is, a sense of self based on subjective feelings or desires of identifying more strongly with the opposite sex or with some combination of male and female.CMDA affirms the obligation of Christian healthcare professionals to care for patients struggling with gender identity with sensitivity and compassion. CMDA holds that attempts to alter gender surgically or hormonally for psychological indications, however, are medically inappropriate, as they repudiate nature, are unsupported by the witness of Scripture, and are inconsistent with Christian thinking on gender in every prior age. Accordingly, CMDA opposes medical assistance with gender transition on the following grounds: Biblical, Biological, Medical, Social, Ethical. Read more:

CMDA Recommendations for the Christian Community