Jack Doesn’t Have to Bake that Cake – But Will We? 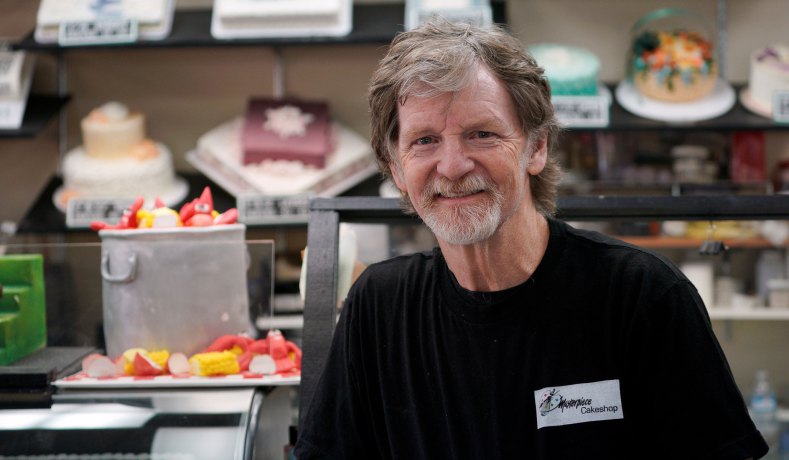 You’ve probably heard the U.S. Supreme Court decided in favor of Colorado baker, Jack Phillips; that the State violated his religious freedom when they punished him for operating his business according to his Christian faith.

Even though the Court ruled 7-2 Monday in favor of Phillips who refused to make a wedding cake for a same-sex couple, we must not relax. This is good, yes, but it is an incremental victory in the religious freedom battle. Expect LGBTQ activists to regroup and react with force.

Unbelievably, Colorado Civil Rights Commissioner, Diann Rice once compared Phillips to a Nazi because he believes in natural marriage. Ironically, Phillip’s father was a WWII veteran who helped storm the beaches of Normandy and liberate Buchenwald concentration camp in Germany.

Regarding the decision, Justice Kennedy wrote:

“The Commission’s hostility was inconsistent with the First Amendment’s guarantee that our laws be applied in a manner that is neutral toward religion,”

Unfortunately, the court said the broader issue of whether a business can deny service of gays and lesbians “must await further elaboration.”

But for now, as Justice Clarence Thomas added:

“Because the Court’s decision vindicates Phillips’ right to free exercise, it seems that religious liberty has lived to fight another day.”

Good for Jack Phillips, but it seems the Court lacked courage to tackle the First Amendment question which is why some are calling the 7-2 ruling “narrow.”

This battle is spiritual and Satan is a defeated foe, but at the same time, expect the bullying of Christian business owners to increase. Preachers of tolerance have no problem forcing others to live in a way that goes against deeply held beliefs.

For example, an Oregon business filed a lawsuit last week against a church that turned down hosting an LGBT event in a building owned by the church due to its “morals clause.” Holy Rosary Church of Portland, is being sued by Ambridge Event Center, who claims their business was damaged by the decision. Ambridge once rented out a space for various events but the church rejected a request from an African-American LGBT support group.

But churches in America can no longer freely abide by the moral teachings of the Bible. And if you fail to comply, look out! They are seeking – get this – $2.3 million in damages!

This just months after a Christian couple, also in Oregon, lost their bakery over their refusal to bake a cake for a gay wedding and were forced to pay activists $135,000 by court ruling. Former owners of Sweet Cakes by Melissa, Aaron and Melissa Klein, had their freedoms trampled when they lost their appeal last December.

Christians seem to have two options: go along with and celebrate sinful behavior that is against biblical teachings, or pay the penalty – whatever price they see fit to enforce. So what now?

The late theologian, John Stott summed it up well when he said:

“We should not ask, ‘What is wrong with the world?’ for that diagnosis has already been given. Rather we should ask, “What has happened to the salt and light?”

How did we reach this present darkness where the foundations of not only culture but the church in America are crumbling? I’ve written a few books on the topic, but these things are certain: leftists will not relent on their agendas, and though God is still on His throne, Christians clearly do not have the influence we used to have on the nation. If we did, things such as the definition and meaning of marriage would not be debated.

We sure could use more watchmen on the wall willing to speak the truth in love and stand against evil at the same time. It is possible and necessary to do both.

With ‘Black National Anthem’, NFL to Double Down on Viewership-Killing Wokeness

Russia, China Extend Treaty Pledging to Support Each Other in Case of Outside Aggression