Jude: Contend for the Faith, Expose Apostates, Warn the Church 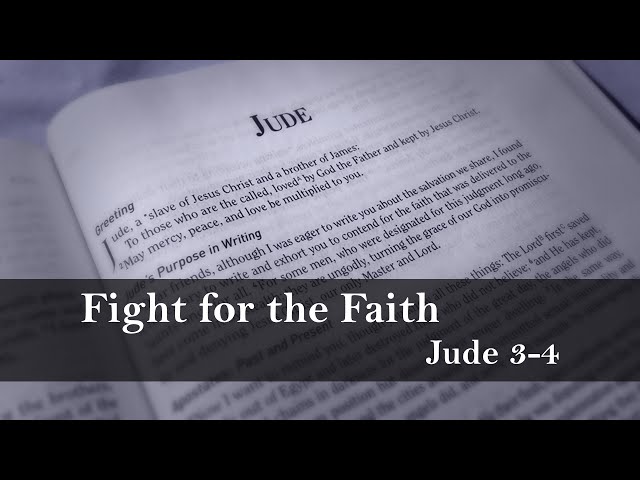 The New Testament is full of warnings about false teachers. Fast forward to 2018. Now in leadership positions, deceivers have crept in and slithered through American denominations infecting countless victims. Some are subtle in their approach while others are blatantly heretical, denying the deity of Jesus Christ, promoting ambiguity and compromise under the guise of love and tolerance, homosexuality, mysticism, social justice, globalism, and universalism.

Some of today’s false teachers are under the umbrella of the emergent church which generally falls under the cult of Liberalism. This man-pleasing movement prefers to conform to this world and rejects the inerrancy of Scripture. They revel in the idea we are in a postmodern or post-Christian society, and often have a form of godliness but they deny the power of God and the Holy Spirit.

If you are a disciple, a follower of Christ and lover of the Truth, we must not only learn to discern the times in which we live but also warn others within the church who are headed for the proverbial cliff. Thankfully, Jude gave us a detailed letter and an example to follow as to how to recognize and deal with false teachers and apostates who come against the Lord Jesus Christ and the eternal truths of Scripture.

The book of Jude (“Judah” in Hebrew) was written just thirty-five years or so after Jesus Christ ascended to Heaven. Most interestingly, Jude was not only one of four half-brothers of the Lord Jesus, but also a brand new convert to the faith. He was not one of the Apostles that lived and walked with Jesus, yet Jude called for discernment and chose to write about false teachers and the need to defend true, apostolic, biblical doctrines.

Peter warned in advance about the coming of false teachers, while Jude wrote about their presence within the early church. In writing to several of the churches, Paul also wrote about deceptions such as Gnosticism, legalism, and worldly philosophy.

Matthew 13:55 lists the half-brothers of Jesus as “James and Joseph and Simon and Judas (“Jude” in Greek).” The Apostle John tells us none of Jesus’ brothers believed in Him – until after the resurrection. We don’t know much more about Joseph and Simon, but Jude begins his letter by referring to himself as a servant of Christ and “brother of James.”

We know that James not only wrote the letter bearing his name, but he was the leader of the Jerusalem Council (Acts 15), a pillar in the church. This established some credibility for Jude right up front.

What could have caused these men to go from skeptics to bold disciples of Jesus Christ, and eventually martyrs for the faith? Like countless thousands of Christians, who would be willing to die for a lie? But Paul gives us the answer which may also be a key to the conversion of Jude as well. In 1 Corinthians 15:7, we know that Jesus appeared to James!

The book of Jude was included in the Canon (A.D. 170) due to his being related to Jesus and the fact Jude was an eye-witness of the resurrected Christ, brother of James, as well as the inspired content of the letter. Clement of Rome (A.D. 96) also supported Jude as authentic.

Jude, a bond-servant of Jesus Christ, and brother of James, To those who are the called, beloved in God the Father, and kept for Jesus Christ: 2 May mercy and peace and love be multiplied to you. 3 Beloved, while I was making every effort to write you about our common salvation, I felt the necessity to write to you appealing that you contend earnestly for the faith which was once for all handed down to the saints. 4 For certain persons have crept in unnoticed, those who were long beforehand marked out for this condemnation, ungodly persons who turn the grace of our God into licentiousness and deny our only Master and Lord, Jesus Christ. Jude 1:1-4

Vs 1. Notice right from the start, Jude refers to himself humbly as a bond-servant, meaning he submitted to the Lordship of Christ, but remember that prior to the crucifixion and resurrection he denied Jesus as Messiah.

He is writing to believers, “the called,” beloved, and “kept for Jesus Christ; who answered His call so this doesn’t refer to an invitation but to an accepted salvation, to those who have a relationship with Christ.

“Beloved” by God – He loves all mankind, but there is an unconditional love toward His children, those who believe and are now set apart from the world because of their status in the kingdom.